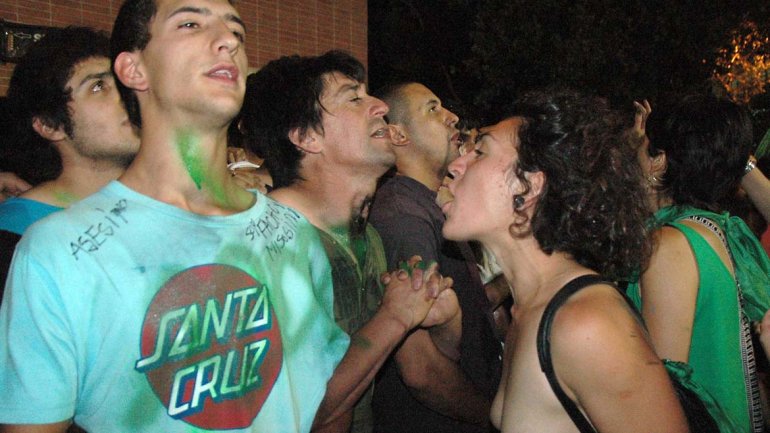 “If the pope were a woman, abortion would be legal”

Amidst crowds of angry feminists shouting that if the pope were a woman killing unborn children would be okay, brave men prayed as they defended their church.  But we see in this article by LifeSite news that it was not just the mocking of the papacy that they endured. 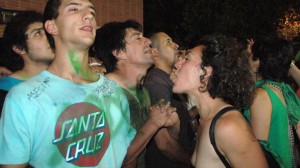 A still taken from a video of what happen in San Juan, Argentina last week.

What else were these men up against?

—Rhythmic chanting of: “To the Roman Catholic Apostolic Church, who wants to get between our sheets, we say that we want to be whores, travesties and lesbians. Legal abortion in every hospital.”

—Being spray-painted quite literally all-over.

—Having Hitler-like mustaches and swastikas drawn on them.

—Naked women dancing and doing things that, to be honest, I’m not comfortable even typing out.

Watch this video to see for yourself.

They stood, with arms linked and holding onto one another, outside their church praying and forming a physical barrier to protect their church from the vandalism of radical pro-abortion feminists who tried to destroy so many other buildings in the city.

They wanted to protect their holy place of worship from being plastered with crude messages like these : 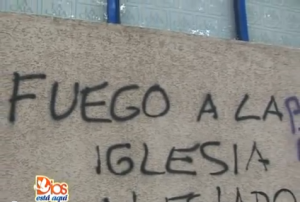 “fire to the church”

Friends, this is why it is a fight for life.  Some people don’t like using the word fight to describe pro-life work because we want to spread our message without aggression, but this reminds us that those who disagree with us won’t always be peaceful.  What happened in San Juan reminds us why protecting and spreading the pro-life message to everyone around us can sometimes be a fight.

As much as I would love to be able to sit down to calmly  and reasonably discuss why abortion is morally wrong and should be illegal, that isn’t always an option.  Like these women in Argentina remind us, we will come up against angry, violent pro-aborts who don’t listen to reason.

So, then, what do we do in these situations? What do we do when we are being attacked for standing for the truth?
Well, we don’t fight back with anger.   That is the easy (and wrong) response, because we are not in the pro-life movement because of hatred.  We do what we do out of love:  love for the unborn children, love for the women who feel the desire to end a life, love for the people who perform abortions.  So, like these men in Argentina surely did, keep in mind this love when you hear about attacks on churches and pro-life groups.

It is only by remembering this love that we can ever hope to stand strong in this war against the evil that is abortion.