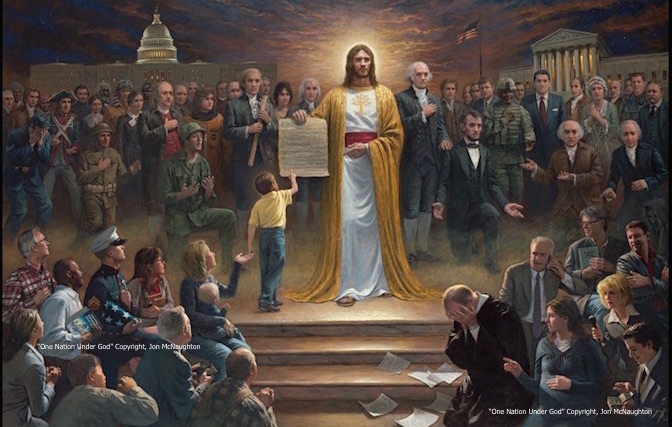 The Supreme Court’s Whole Woman’s Health v. Hellerstedt decision to strike down Texas’s abortion facility regulations has naturally generated many condemnations from pro-lifers, which have in turn generated a lot of pro-abortion sneering that we have the nerve to dislike it when judges disenfranchise people trying to protect women and children from a corrupt, predatory industry.

“There will be a time of reckoning,” Staver said. “I think what this Supreme Court has done in 1973 [and] 1992, when they reaffirmed Roe v. Wade, and throughout the history and obviously with this decision is they have built this country with a policy of mixing the blood of children into the mortar of this country. And there will be a day of reckoning; God will not continue to allow his children to be slaughtered by any nation. It will come a time when this nation, or any nation, that ultimately takes the lives of their innocent children that will have a day of reckoning and I think we, as a church, have to wake up to this fact.”

First, let’s set the record straight as to what Staver did not say. He didn’t say a single court ruling sparks divine judgment in isolation; he was talking about the accumulated weight of decades of tolerating injustice. He didn’t say he wants God to punish America, or even remotely suggest anyone should take it upon himself to do any punishing; he was warning us to change course in hopes of sparing us what’s at the end of it.

Second, abortionism is a jealous deity, so its followers have always had trouble digesting contrary views of how God sees abortion. So it sees remarks like Staver’s and immediately deems them insane. Who could really believe in something as nutty as God punishing countries for government decisions?

Well, Martin Luther King, for one. Abraham Lincoln, for another. In fact, there is a long tradition of history’s most admired figures speaking in, if anything, even starker terms about God’s response to whether societies strive for good or embrace evil:

George Washington: I am sure there never was a people, who had more reason to acknowledge a divine interposition in their affairs, than those of the United States; and I should be pained to believe, that they have forgotten that agency, which was so often manifested during our revolution, or that they failed to consider the omnipotence of that God, who is alone able to protect them.

Thomas Jefferson: Can the liberties of a nation be thought secure when we have removed [by tolerating slavery] their only firm basis, a conviction in the minds of the people that these liberties are the gift of God? That they are not to be violated but with his wrath? Indeed I tremble for my country when I reflect that God is just: that his justice cannot sleep for ever.

Benjamin Franklin: I’ve lived, Sir, a long time, and the longer I live, the more convincing Proofs I see of this Truth — That God governs in the Affairs of Men. And if a sparrow cannot fall to the ground without his Notice, is it probable that an Empire can rise without his Aid? We have been assured, Sir, in the Sacred Writings, that except the Lord build the House they labor in vain who build it. I firmly believe this, — and I also believe that without his concurring Aid, we shall succeed in this political Building no better than the Builders of Babel: We shall be divided by our little partial local interests; our Projects will be confounded, and we ourselves shall become a Reproach and Bye word down to future Ages.

Abraham Lincoln: If we shall suppose that American slavery is one of those offenses which, in the providence of God, must needs come, but which, having continued through His appointed time, He now wills to remove, and that He gives to both North and South this terrible war as the woe due to those by whom the offense came, shall we discern therein any departure from those divine attributes which the believers in a living God always ascribe to Him?

Martin Luther King, Jr: God has a way of standing before the nations with judgment, and it seems that I can hear God saying to America [regarding the Vietnam War], “You’re too arrogant! And if you don’t change your ways, I will rise up and break the backbone of your power, and I’ll place it in the hands of a nation that doesn’t even know my name. Be still and know that I’m God.”

There is no doubt that the murders of nearly 60 million innocent children rise to that level of moral severity, or that Hellerstedt was fundamentally unjust. It perverted the Constitution, relied on false information, disregarded medical authorities, and drew illogical conclusions about the law’s effect, with the ultimate result that more babies will die and a criminally negligent industry remains free to mistreat their mothers.

Whether God personally intervenes for injustices such as these may be a matter of belief, but as our forefathers’ example shows, it’s clearly a more serious and respectable belief than Right Wing Watch wants you to see it as. Moreover, we shouldn’t need fear of punishment in order to put our foot down against evil; the suffering and dishonesty should be enough.

Sadly, it often isn’t enough; otherwise slavery wouldn’t have lasted almost a century after the American Founding, and abortion would have been abolished years ago. So we would do wise to follow Jefferson’s lead and tremble for our country when reflecting that God is just, and that his justice cannot sleep forever.