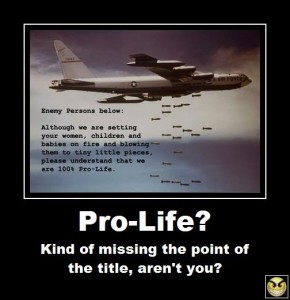 In their never-ending quest to impugn the motives of pro-lifers, abortion defenders have accused us of hypocrisy because some support the death penalty and others oppose various government benefits.

Another variation of this attack has surfaced in our comment threads recently. Sharon Rose says the only way we can justify opposing abortion would be if we’re “equally and as vehemently against war, against the death penalty, against killing of any kind.” Astraspider asks if we respected human life “when we punished 100,000 Iraqis with their lives to avenge 3,000 of our own deaths they had nothing to do with[.]” The alleged hypocrisy of simultaneously being pro-life and “pro-war” is a very popular talking point.

But as with many other pro-abortion efforts, the logic of this attack doesn’t extend beyond the superficial. To start by getting the obvious out of the way, the pro-life movement isn’t of one mind on foreign policy, meaning pro-aborts will need to find some other reason to hate those of us who don’t fit their generalization.

The claim doesn’t fare much better against the rest of us, either, because nobody is simply “pro-war” in the sense that it’s something to celebrate, as if they value conquest and bloodshed for their own sake. Everybody supports American involvement in some wars (just about everyone except hardcore pacifists agrees on World War II, for instance) and opposes involvement in others, based on the unique circumstances of particular cases.

We could endlessly argue the merits of our nation’s interventions in Iraq, Afghanistan, Libya, or any number of other conflicts throughout our history, as well as the various mistakes made in each one. Such a debate, however, would depend largely on hotly contested factual questions, in-depth historical analysis, and navigating the nuances of international politics, and therefore falls more within the scope of a foreign policy website than a pro-life one.

Suffice to say, proponents of a given military action believe their cause is warranted under just war theory: it is meant to end or prevent a greater loss of life than that of the war itself, non-violent alternatives have been exhausted, effort is made to spare civilians as much suffering as possible, etc. Such judgments may be correct or mistaken depending on the case, but they don’t constitute a devaluing of human life.

What our critics are really saying, then, is that we have to be pacifists in order to truly be pro-life. Which is an absurd standard, considering that no right other than thought is completely without limitation. Is it “anti-freedom” to support imprisoning felony convicts? Is it “anti-speech” to support libel laws? Is it “anti-life” to let police officers use lethal force? Clearly not. It’s entirely reasonable, principled, and consistent to value a right while recognizing limitations on it when it comes into unavoidable conflict with other rights.

Lastly, and most importantly, the potential wrongness of any given war and of those who support them has no bearing on the case against abortion. We could concede the wrongness of every single war this nation’s ever fought, and it still wouldn’t justify letting us slaughter the unborn. There is simply no comparison between killing an enemy soldier on the battlefield and the needless and killing a baby in the womb. The former (in just wars) involves someone who knew the risks going in and has defensive capabilities, and is meant to save lives in the long run. The latter involves an innocent, defenseless victim, and saves nobody.