For the "anti-humanist" group Church of Euthanasia, abortion is a sacrament - Live Action News 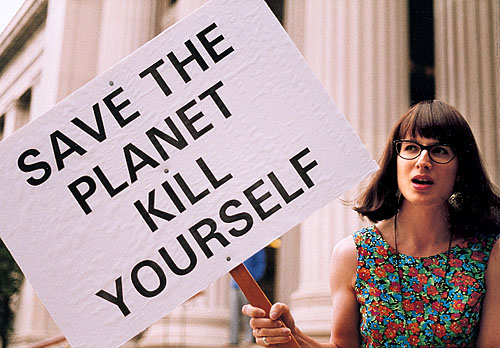 The “Reverend” Chris Korda, founder of the extremist pro-abortion group Church of Euthanasia.

I first learned of the Church of Euthanasia in high school, when a friend of mine gave me one of their bumper stickers. It was years later, when the Internet became a part of our lives, that I finally looked them up. I’m telling you about them today because this pro-death cult is the logical end result of our death-obsessed culture.

The “church’s” origin story is both ridiculous and disturbing:

The Church of Euthanasia was inspired by a dream, in which Rev. Chris Korda confronted an alien intelligence known as The Being who speaks for the inhabitants of Earth in other dimensions. The Being warned that our planet’s ecosystem is failing, and that our leaders deny this. … Rev. Korda awoke from the dream moaning the Church’s infamous slogan, Save the Planet – Kill Yourself.

The explanation goes on to bemoan the dangers of “climate change” and “overpopulation,” and then gets right to the crux of their message:

Even a major war or epidemic hardly dents the rate of growth, and modern wars have tremendous environmental consequences. It is for these practical reasons, as well as moral ones, that Euthanasians support only voluntary forms of population reduction, including suicide, free abortion, and sodomy, which they define as any sexual act not intended for procreation. They are also fiercely vegetarian, and support cannibalism for those who insist on eating flesh.

Whoa, whoa, whoa, you might be thinking. These are crazy fringe extremists, and as pro-lifers we don’t really need to worry about them.

Really? The “church” was founded in 1992. I found out about it two years later, at age fifteen, from a friend in an AP History class in a suburban high school in Texas. And that was almost twenty years ago.

Every once in a while, somebody new – maybe somebody young and impressionable – finds out about the Church of Euthanasia, and thinks it’s a little bit awesome. Or maybe a lot awesome.

Here is what the “church” has to say about abortion:

“Sister Catherine” goes on to say that because people are too irresponsible for birth control,  “[t]he time has come for abortion to be encouraged as birth control.” The “sister” particularly loves RU486, calling surgical abortion “crude.” She adds:

Where are all those fetuses going, anyway? Judging by the number of pro-life  lunatics that manage to get hold of them, too many are winding up in dumpsters. How typically American! Let’s recycle those fetuses, by combining two of the pillars of the church. Fetus pate, anyone?

The church’s one commandment is “Thou shalt not procreate.” A lot of people seem to have no trouble following this commandment and upholding the four pillars.

The Church currently has hundreds of card-carrying members who’ve taken the vow, plus clergy, directors, and thousands of “e-members” on the Internet. We have members as far away as Italy and Latvia, though the majority are still in the USA.

How lucky for America.

In case you’re thinking these are just a handful of wackos, be advised they link to several other “anti-humanist” organizations from their site, such as the Voluntary Human Extinction Movement and Gaia Liberation Front, whose philosophy is summed up as “the Humans must be completely exterminated, ASAP.”

It is dangerous to dismiss these people as mere extremists. The truth is, they’re only carrying a pro-abortion, pro-euthanasia mentality to its logical end. If abortion is a responsible and acceptable act – as it is, according to pro-choicers – then what is abortion’s exact opposite, procreation?

An abortion-minded woman might just be scared. A clinic worker might mistakenly think she’s helping. Even for an abortionist, killing might be incidental to a paycheck. But for the adherents of the Church of Euthanasia and many others like them, abortion is nothing short of a sacrament.