Another Texas abortion clinic has closed, the result of new laws which require medical standards be applied to clinics in order to offer abortion services.

The closure of the Killeen Women’s Health Center follows the failure of the center to obtain hospital admitting privileges for physicians performing abortions. 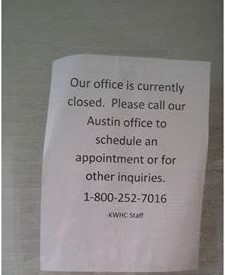 This Killeen closure is the latest in a string of shutdowns of Texas abortion facilities since the passage of HB2 in July, which requires abortion doctors to have hospital admitting privileges within 30 miles of the abortion clinic. The battleground in Texas has spawned a war on both sides of the abortion issue.

HB2 has sparked mass controversy and waged a war of words which has become a focal point in the Texas gubernatorial race with the candidacy of Wendy Davis whose infamous filibuster against HB2 gained her fame with Planned Parenthood and pro-abortion champions across the nation. However, behind the controversy is a law so sound that it has not only worked in closing abortion clinics but has been sustained by court review.

This spring the Fifth Circuit Court of Appeals upheld the physicians restriction enacted by HB2, which has moved most of the battle back to Texas where abortion proponents are left to, essentially, campaign for doctors and hospitals,. Crutcher expresses doubt that abortion rights advocates want to advance the issue to the Supreme Court:

Thus, the abortion industry and its media supporters have moved the battle to the blogs. Think Progress wrote:

“In Texas, where the state’s endangered clinics are struggling to stay open, the anti-abortion organization Life Dynamics has put together a campaign notifying hospitals that offering admitting privileges to any abortion-providing doctors could be bad for them in some mysterious, unnamed way. The letters addressed to every hospital in the state don’t specify what exactly the facilities will experience if they do provide access for a doctor. But there are a number of different ways to target a hospital in order to cut off access to legal abortion. Other examples from around the country make it clear that these institutions may experience protests, picketing, and outright harassment of their medical staff and their executives.”

And NARAL Pro-choice America jumped on board the train, trying to derail Life Dynamics with, literally, a smear campaign by posting the Life Dynamics hospital letter on its Facebook page with comments smeared across the original letter, attempting to create scare tactics. Comments included, “The anti’s are utterly ruthless, they will stop at nothing,” “Unfortunately, this will work because of religious peer pressure,” and “These people need to be outed.” 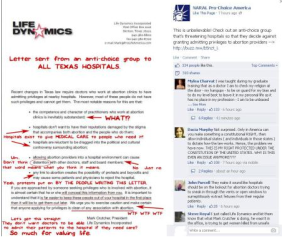 The walls are closing in on the abortion industry in Texas because new laws have shown the abortion facilities could not actually protect even the mother’s life in case of medical emergency in the process of killing her child. Unable to admit a woman to a hospital is downright dangerous, but that hasn’t stopped them from trying. As Crutcher notes:

“Fortunately, the kind of monsters who are willing to snuff-out innocent and defenseless human lives for money are rare. This letter and these postcards will guarantee that any doctor or hospital that gets sucked in by the lies of the abortion industry will do so with their eyes wide open.”

And in the city of Killeen, TX, there are no abortionists able to meet the requirements of the law. And another clinic bites the dust.