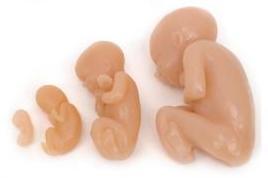 Here’s a question for Mr. Lee Panagoulias, the principal of Branford High School in Branford, Connecticut: in a state where there is no law requiring parents to be notified if their minor daughter seeks an abortion, isn’t it still important for minors, if they should seek an abortion, to have a comprehensive and realistic understanding of what they’re having extricated from their uteruses?

Guess not. Because Samantha Bailey-Loomis, a 17-year-old pro-life senior at Branford High School and founder of the school’s pro-life club, says that educator Panagoulias has banned her club from displaying life-sized fetus models. After all, nothing ruins school spirit faster than a life-sized model of a developing baby!

One would guess that the Acoustic Guitar Club can bring a guitar to lunch and the Canoe and Kayak Club can certainly display the equipment necessary to participate in their water sport. As for the Cultural Diversity Club, it’s highly likely that Panagoulias encourages that group to be as culturally diverse as possible.

And then there are the more politically controversial clubs. Does Principal Panagoulias set restrictions for the Gay and Straight Alliance? How about the Green Scene or Peace Jam?

Accused of being an activist, Samantha is wondering why she is being discriminated against, especially when other high school clubs that advocate for gays and the environment have had no problem setting up their tables, recruiting new members, or sharing information.

The 17-year-old pro-life spokesperson, Sam, who also is the editor of the school newspaper, said this about the other clubs and organizations:

They had information about what their club does and what they have done in the past and they have pictures and they have poster boards just like ours, except for with different content on it.

Samantha alleges that Mr. Panagoulias told her and her club that this “topic in particular is too controversial to be talked about in public school.” In other words, truth-telling and freedom of expression are too controversial to be exercised in a public-school environment. One can’t help but wonder how Mr. Panagoulias would feel about Planned Parenthood Teen Clinic volunteers setting up an informational display outside the cafeteria.

Either way, what Mr. Panagoulias fails to realize is that he’s a high school administrator in Connecticut, which is one of 17 states where, with the same taxpayer money that funds public schools like Branford High School, if you’re a low-income woman in need of an abortion, you’re provided “protection for reproductive choice and…nondiscriminatory public funding of abortion.”

So what better place to bring some truth into the conversation than a publicly funded educational institution full of girls being taught that, if need be, abortion is a fine option?

Meanwhile, the debate rages on, and notwithstanding Mr. Panagoulias’s concern for lunchtime civility, Sam is standing firm for life in the spirit of Thrin Scott. Thrin is the 16-year-old who was assaulted by a University of California Santa Barbara associate professor of feminist studies for displaying a pro-life poster in a campus “free speech zone.”

Samantha maintains that whether Mr. Panagoulias approves or not, she and her group plan to still set up a pro-life club display table, recruit new members, and continue standing for life.