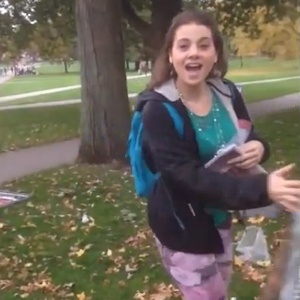 A student who was offended by a graphic pro-life display at Ohio State University knocked down signs and claimed that her college campus was an inappropriate venue for the display. But the savvy pro-lifer behind the camera kept his cool, and by the end of their conversation, the hostile student helps to pick up the signs that she had knocked over just minutes earlier.

The display, set up by an organization called Created Equal, showed images of aborted children. The young woman who was offended by the message stated, “What you guys are doing is wrong.”

She went on to claim that the children on the signs were not human, but instead were “clumps of cells,” and “just zygotes.” Without missing a beat, though, the pro-lifer responded that he himself was a clump of cells, and so was she! Taken aback by his logic, the girl argues that the pro-lifer can have his own opinions but he “doesn’t need to come here and make people feel bad about themselves.” The pro-lifer points out the obvious though: If he’s entitled to his own opinion, why did she knock down all of his signs? Realizing his point, she helps to pick up the signs.