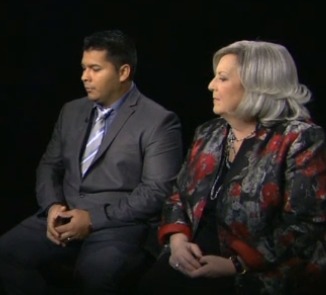 Wednesday night, the husband and mother of the late Marlise Munoz gave CNN’s Anderson Cooper 360° an exclusive interview chronicling the events that led up to Marlise’s ultimate death, along with that of her pre-born daughter, earlier this week.

The interview primarily vilifies the Texas law that required Marlise to be kept on life support until her baby, whom Marlise was still gestating in her “brain dead” state, had reached viability, and Cooper focused little on the fact that Marlise had been pregnant.

Below is an excerpt of the transcript.

COOPER:  So the doctors initially didn’t even — didn’t know about this law.

MUNOZ:  No.  Actually, we were called back into her room in ICU.  And the doctor told us about this.  And of course, we’re like no, we want to disconnect her.  And his words were, we were asking for an explanation.  His words, he’s like I’m sorry, I just found out about this law five minutes before you did.  I’ve been told to notify you of it.

COOPER:  When they told you this, I mean, this is the worst thing that could possibly happen to you.  You’re in this horrific situation.  And you’ve made this difficult decision based on conversations that you’ve had with your wife, with your daughter in the past.  What goes through your head when a doctor says we’re not going to follow your wishes?

MACHADO:  For me, I thought there must have been a miscommunication of some way.  We said no, no, no, no, that’s not what she wanted.  She wanted never to be on life support.  And that’s when they’re saying, well, but she’s pregnant, and then it went from there.  So we knew we weren’t going to let this rest.  Because it wasn’t right.  It was not honoring her wishes.

COOPER:  I think a lot of people think, well, maybe if you had had something in writing, that would have made a difference, if she had written down if there was an advanced directive or something.  But under this Texas law, even if it’s in writing, it gets overridden.

MUNOZ:  She could have been detailed everything exactly how this happened, detailed it, and it wouldn’t have mattered.

COOPER:  There are some families in that situation who think, well, maybe she can come back from this.  Maybe a miracle can happen.

MUNOZ:  I mean, we still held the hope.  I mean, I did.  I can say I did.  But for me, it was, at least for me, I couldn’t turn off the knowledge that I know of what was going on.  And even though I did want to keep the hope — and you — it’s my wife.  I’d do anything.  I, many a nights that I asked God to take me instead.  But you can’t turn off that knowledge that you know how bad it was.  And like I said, I promised her.  I told her.  I will honor your wishes.  For me and her dad, that was the hardest.  Because we looked her in the eye and told her.  And for the state of Texas to not let us do that was hard.  You want to keep your word to your loved one.

The abortion lobby took a keen interest in the case, and NARAL Pro-Choice America even created a petition asking Attorney General Greg Abbott to address the purported discrepancy between Marlise’s end-of-life wishes as her husband recounted them, and the Texas law that protects the children of pregnant women who are pronounced “brain dead” until they are viable and can be given a chance at life outside the womb (this normally takes place around 24 weeks).

Marlise’s wishes were not documented on paper, and whether or not she would have wanted to be disconnected from her ventilator knowing that it would have prematurely ended her child’s life is unclear. (Brain death as “death” is a development of the early 1980s, and is highly-controversial because its diagnosis can, legally, vary greatly between physicians and hospitals.)