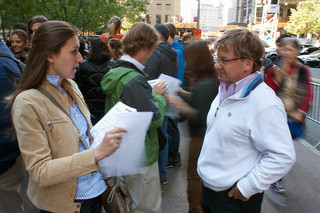 It may be hard to remember, but we all must keep this lesson close to our hearts. 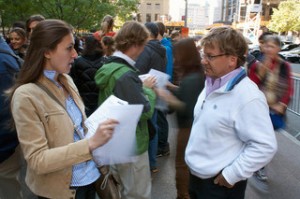 Civil conversation and care for others is key - yet we should never back down from speaking the truth. Photo credit: felipe.cabrera on Flickr.

Today, I expected to have a peaceful day at the Gardens I was visiting with my daughter, husband, and mom. And it was peaceful – mostly, that is. I called my husband to let him know we had arrived, and he informed me that people from Planned Parenthood were standing close to the entrance. They had asked him if he supported Planned Parenthood, and he replied, “Yes. I support shutting them down.” Personally, I really like that answer. It’s creative and opens doors to share the truth we know with people in the abortion industry.

While my husband is a non-confrontational, kind person, he is never afraid to stand up for what he believes in. This is one of the many reasons I admire him so much. I wish all pro-lifers could have his balance.

When I arrived, he was still talking to the people from Planned Parenthood – one guy and one girl were there. My husband had just asked the guy if he would like to know the reasons why my husband does not support Planned Parenthood. The guy replied, “No, I don’t think I have the time for that.” (I would have probably said, “That’s probably right. The list is way too long.”)

The guy from Planned Parenthood had been quite confrontational and rude, but he did not care for my husband to express his opinion. While my husband stood waiting for me, the guy asked him to “stop staring at them” and informed him that he couldn’t tell whether or not he was blinking since my husband was wearing sunglasses. (Yes, he really said that.) He also accused my husband of being angry and hating them, although he was the one who had told my husband he didn’t want to talk to him.

In my opinion – whether you’re pro-life or pro-choice – you invite conversations when you stand in public places collecting signatures or campaigning for support. You should never be rude to those who attempt to engage you in civil conversation (as my husband did), even if you disagree.

When we passed these two again on our way back into the Gardens, the guy approached my husband once more, standing very close to him. He accused my husband of cursing out the girl who was with him. Since I was right there, I know for a fact that my husband did not do this. (In fact, I’ve never heard him curse once in the over four years I’ve known him.) He had simply stated that he did not support Planned Parenthood. Someone was either lying or needed his ears checked! As the conversation continued, my husband said, “I do not dislike you. I dislike the organization you work for.”

This is a principle that many of us in the pro-life world could stand to learn: as much as we dislike Planned Parenthood and abortion, let us not dislike the people in the abortion industry. Had we been raised differently, not experienced a conversion, or a multitude of other things, we could be them. As hard as that is to admit, we could just as easily fall into wrong actions as anyone else.

Since I am a Christian, I thank God that I’ve seen the light and that I know beyond a shadow of a doubt that abortion is wrong. Yet, instead of hating those who disagree with me – or even attack and argue with me – I ought to approach them with an attitude of care, concern, and prayer. I want to learn the balance my husband has. I want to always hate abortion and dislike Planned Parenthood, but I want to love people.

How have you learned to love people while still hating abortion and speaking the truth about Planned Parenthood? Share your lessons and experiences below! If you’re pro-choice, what have pro-lifers said to you that has made you want to listen?