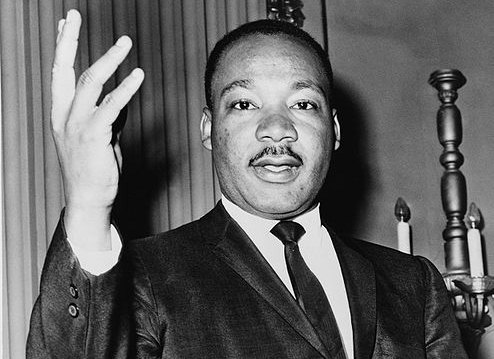 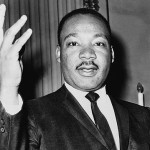 Last Thursday marked the forty-fifth anniversary of the death of Dr. Martin Luther King, Jr. In light of recent events, I am reminded of this passage from King’s famous “Letter from a Birmingham Jail”:

Whenever the early Christians entered a town, the people in power became disturbed and immediately sought to convict the Christians for being “disturbers of the peace” and “outside agitators.” But the Christians pressed on, in the conviction that they were “a colony of heaven,” called to obey God rather than man. Small in number, they were big in commitment. They were too God-intoxicated to be “astronomically intimidated.” By their effort and example they brought an end to such ancient evils as infanticide and gladiatorial contests. Things are different now. So often the contemporary church is a weak, ineffectual voice with an uncertain sound. So often it is an archdefender of the status quo. Far from being disturbed by the presence of the church, the power structure of the average community is consoled by the church’s silent – and often even vocal – sanction of things as they are.

As we have witnessed in both the grisly Gosnell trial and Planned Parenthood’s recent opposition to the “Infants Born Alive Act,” that ancient evil of which Dr. King spoke has revived. Last year, the prestigious Journal of Medical Ethics created a stir with the publication of an article entitled “After-Birth Abortion:  Why Should the Baby Live?,” in which the authors defend infanticide. Even President Obama himself openly opposed legislation in the Illinois State Senate which would have prevented doctors from killing babies who survived failed abortions. Jill Stanek describes witnessing such killings in Christ Hospital in Illinois:

Infanticide has indeed returned, and the church must once again resist this evil, as must all people of goodwill.

For many, however, the notion of modern infanticide seems too outrageous to be taken seriously. This was the same dilemma faced by Thomas Clarkson in 1785. As a young divinity student, he had stumbled across evidence of the brutalities involved in the Atlantic slave trade. Clarkson lived in England, where the slave trade was universally accepted but only vaguely understood. As Clarkson studied more, the horrors he uncovered consumed his mind: “In the night I had little rest. I sometimes never closed my eye-lids for grief.”

One summer day, as Clarkson was traveling to London, he reached a decision that was destined to change the course of history.

[Slavery] wholly engrossed my thoughts.  I became at times very seriously affected while upon the road.  I stopped my horse occasionally, and dismounted and walked.  I frequently tried to persuade myself in these intervals that the contents of my Essay [on slavery] could not be true.  The more however I reflected upon them, or rather upon the authorities on which they were founded, the more I gave them credit.

At last, these feelings came to a climax:

I sat down disconsolate on the turf by the roadside and held my horse. Here a thought came into my mind, that if the contents of the Essay were true it was time some person should see these calamities to their end.

Clarkson was 25 years old at the time, a recent graduate with little money and virtually no political influence. His decision to “see these calamities to their end” set him in opposition to a force which dominated the world’s economy and was deeply entrenched in every level of society. But as Dr. King would say, Clarkson was “too God-intoxicated to be ‘astronomically intimidated.’”

On May 22, 1787, Clarkson and eleven of his unimportant friends gathered in a dingy old print shop, where they committed themselves to the abolition of the slave trade. Twenty years later, the slave trade was no more.

We may not experience the same victory, but those of us at Live Action are here to fight. We hope you will join us.

Note: The quotations from Thomas Clarkson were obtained from Adam Hochschild’s excellent history, Bury the Chains: Prophets and Rebels in the Fight to Free an Empire’s Slaves.