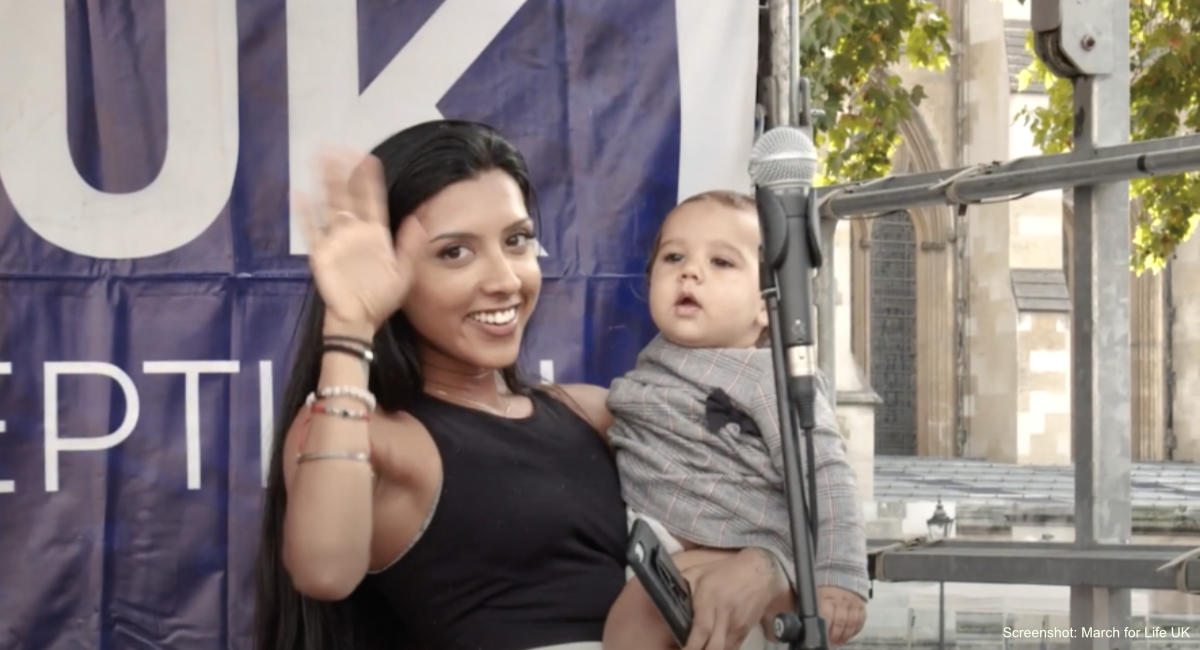 At the 2022 UK March for Life, a woman named Amrita told her story of abortion pill reversal. She considered abortion because she was financially unstable and not in a relationship with the baby’s father. She thought taking the abortion pill would be easy, because “I was always told, you could just take a pill, and it will be done. Like everything will be better. There’s no issue with taking just a pill and having an abortion.”

She discussed the pregnancy with the baby’s father, who didn’t believe in abortion but offered to support whatever choice she made.

Amrita did research online about the abortion pill. She was especially struck by the stories of women who regretted their abortions. She said:

I read loads and loads of stories of women that even nine years after having an abortion regretted having an abortion. They had a name for the unborn child, they felt like how old would they be now? What would they be like now? And that’s the bit that got me overall, is the guilt of if the child if this fetus is not alive, it’s not a child, how can people have so much emotion towards it?

She also did research on when life begins but was still confused and worried about the future. She said, “I thought, okay, the best place to get the correct answers to my question would be to call an abortion clinic.”

No Answers from the Abortion Facility

She called, and the abortion worker encouraged her to come in. Amrita and the baby’s father prepared a list of questions. But when she arrived, the workers wouldn’t allow her child’s father to stay with her and participate in the “counseling” session.

Amrita was upset by this. She said, “he should still have somewhat of a say… Even though I’m the one carrying the child, if I want him to be there, he should be able to be there.” But he was forced to leave.

Amrita attempted to ask her questions, but the abortion worker didn’t answer any of them. She just said, “It’s as simple as, if you want to have an abortion, take the pill, if you don’t, don’t.”

Still uncertain, Amrita agreed to receive the pill by mail.

Again, No Help from the Facility

She kept it for several days, unsure if she should take it. Finally, she swallowed it – and felt immediate regret. She says, “Within seconds, I instantly regretted it. And I just sobbed and cried, and I just broke down. I was like, I want this baby more than anything. Like, the guilt I felt was so strong.”

She called the abortion facility in a panic and asked them what she could do to reverse the abortion.

She says the abortion worker who answered was “very calm” and said, “You know what, we get this every day. Loads of women call back and they regret it. All you have to do is not take the second abortion pill. And as long as you don’t bleed, everything will be fine.”

According to this worker, women frequently call the abortion facility after taking the abortion pill, asking to reverse it. However, the abortion workers don’t tell the women about abortion pill reversal, which could save their babies. Instead, they withhold that information, and simply tell them not to take the second pill.

But mifepristone, the first pill in the two-drug abortion pill regimen, is the drug that disrupts the lining of the uterus, starving the child of nutrients, by blocking the action of the pregnancy hormone progesterone. The second drug, misoprostol, triggers contractions which cause the mother to expel the dead baby.

But neglecting to take the second drug won’t necessarily save the child. Progesterone, which is administered in abortion pill reversal, has the potential to stop the action of mifepristone.

Amrita instead searched online for abortion pill reversal and was connected to a doctor who prescribed her progesterone.

An ultrasound later confirmed that her child still had a heartbeat. Amrita eventually gave birth to her daughter, and has no regrets:

I’ve never regretted it. I was one of them [sic] people before getting pregnant that was like you’re not – why would anyone have children? Like, children were like a big disruption in your life. I am now the type of person that will sit there and say, you know what, having a child is the biggest blessing anyone can ask for.

Amrita and her baby were fortunate. How many women call that abortion facility pleading for help to reverse their abortions, but aren’t told about abortion pill reversal?