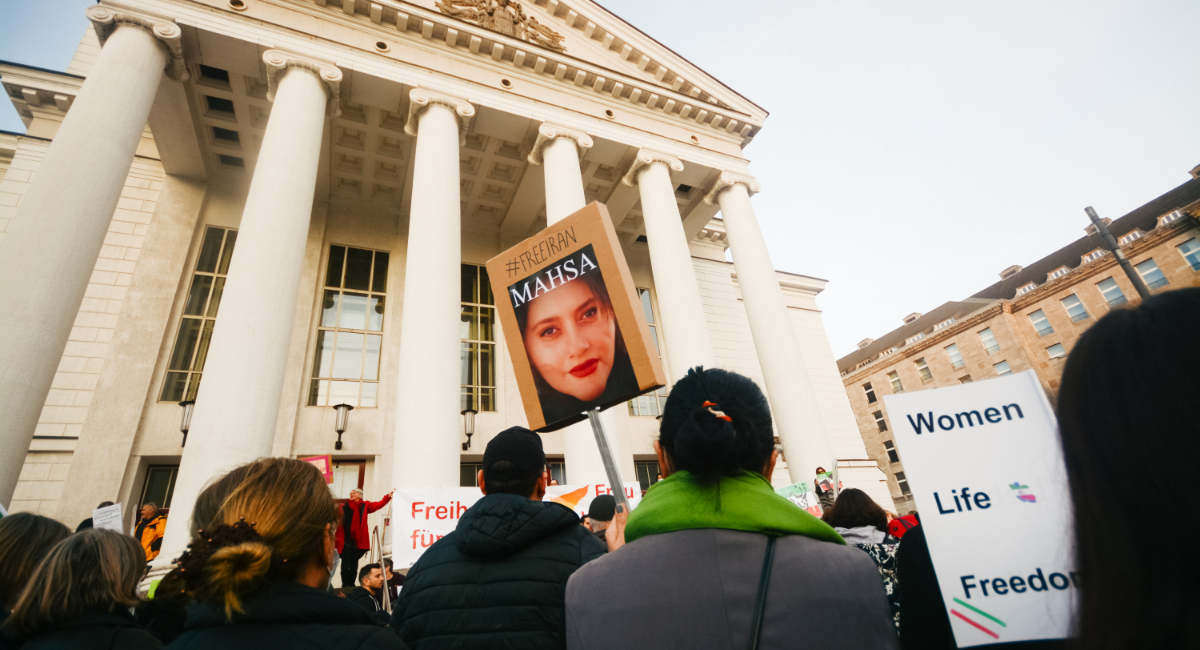 In the United States, protests swept the country in May in response to a leaked a draft opinion from the Supreme Court in Dobbs v. Jackson Women’s Health Organization, signaling that Roe v. Wade (which legalized homicide against preborn human beings in every state) was going to be overturned. These protests were often violent, with pro-abortion feminists fighting for the ability to be able to legally kill their own innocent preborn children. These activists have threatened churches, firebombed pregnancy centers that help women who choose adoption or parenting, and attacked pro-lifers.

Yet these same pro-abortion feminists appear to have largely ignored the true human rights violations against Iranian women.

In recent weeks, at least one person has been sentenced to death by the Iranian government, with the possibility of more to come… for fighting for the rights of women to choose whether or not to wear a hijab, or head covering. Protests have swept through Iran, involving thousands of people, as the Iranian government has taken the lives of citizens for exercising their right to protest.

The National Organization for Women (NOW) released a statement this week condemning Iran, seemingly the first time the group has addressed the human rights injustices there since 2011. The Feminist Majority Foundation reported about the protests once, but it was, again, the first time Iran had been mentioned in years. Feminist website Jezebel and pro-abortion site Teen Vogue have covered the protests a mere handful of times, while vigorously promoting abortion with laser focus. Alexis McGill Johnson, president and CEO of Planned Parenthood, seems to have completely ignored the issue.

While Iranian women are literally fighting against being put to death by an oppressive regime, pro-abortion feminists in the U.S. are focused almost entirely on ensuring that their own preborn girls and boys can be unjustly put to death.

Official Iranian law requires all women to wear a hijab anytime they are out in public, with violators subject to a whipping of up to 74 lashes. But women have increasingly been fighting back against the onerous obligations.

Mahsa Amini, a 22-year-old woman, was not described by her family as politically active. She had come to Tehran to visit family, and was arrested on September 13 by the Guidance Patrol at the entry of the Shahid Haghani Expressway. Her crime? Wearing her hijab too loosely.

Her brother, who was with her, was told she would be taken to a detention center for a briefing and then released within an hour. Instead, witnesses said she was tortured before arriving at the police station, where she began to lose her vision and fainted. She wasn’t taken to a hospital for another two hours.

Once in the hospital, Amini was in a coma, with photos of her lying in the hospital bed quickly going viral. Police claimed she died of a sudden heart failure; however, the hospital where she was treated published — and then deleted — an Instagram post claiming that Amini was already brain-dead when she was admitted. Photos of Amini in the hospital also showed bruising underneath her eyes, and bleeding from her ear. CT scans of her skull allegedly showed bone fractures, hemorrhage, and cerebral edema.

Amini’s death quickly sparked protests across the country, with people gaining the courage to fight back against the oppressive regime. One woman, whose son was killed, carried his picture in the air at a protest. “I am not scared of anyone. They told me to be silent. I will not be,” she yelled in a viral video. “I will carry my son’s picture everywhere. They killed him.”

Schoolgirls have ripped off their headscarves in their classrooms as they chanted protest songs. Protesters openly fought back against Basij members, a volunteer paramilitary group designated as a terrorist organization by the United States. Yet the government has fought back just as fiercely; human rights groups have estimated that as many as 15,000 people have been detained, with 341 people allegedly killed during the protests.

One crackdown by Iranian forces has been dubbed “Bloody Friday” as 66 people were allegedly killed; this particular protest was unleashed after a teenage girl was said to have been raped by a police officer. The judiciary, meanwhile, publicly announced that 1,000 people would face public trials for charges of sabotage, assaulting or killing members of the security forces, or setting fire to public property.

Now, a Revolutionary Court in Tehran has issued the first death sentence for participating in the protests, claiming the accused had set fire to a government building. More people are being held on charges that could result in the death penalty. An open letter signed by 227 of Iran’s 290 members of Parliament called for protesters to be taught a “good lesson” so others would learn not to fight against the government regime.

“We, the representatives of this nation, ask all state officials, including the Judiciary, to treat those, who waged war (against the Islamic establishment) and attacked people’s life and property like the Daesh (terrorists), in a way that would serve as a good lesson in the shortest possible time,” the letter read, adding that the punishments would “prove to all that life, property, security and honor of our dear people is a red line for this (Islamic) establishment, and that it would show no leniency to anybody in this regard.”

Despite the pushback from the government, protesters promised they would keep fighting. “These terrorists think that our generation is the previous generation. We are not. Let me assure you,” an anonymous protester told CNN. “If the dust settles and we stop protesting, they are going to kill even more of us. They are going to detain even more people and they are going to turn us to North Korea. This is not the end. I promise you that.”

As Iranian citizens protest for human rights, abortion supporters in the U.S. seek to violate the most fundamental human right of all: the right to life. Preborn children are innocent human beings with an intrinsic, God-given right to life, but that right is being unjustly taken from them.

Real feminism, and real human rights activism, do not seek to empower some by robbing others of their lives.