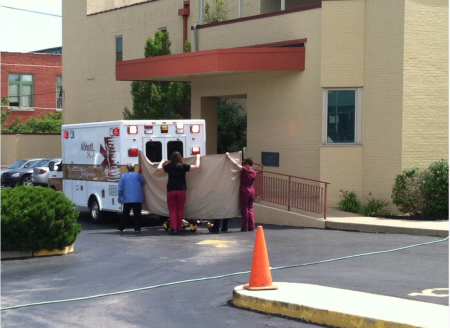 Images released by a pro-life group show Planned Parenthood employees holding a sheet to shield a victim of a botched abortion from public view. The victim was rushed to the emergency room around 10 a.m. July 10 following an injury at the abortion clinic. The incident was reported by Coalition for Life , a group that regularly advocates for the unborn outside Planned Parenthood in St Louis.

Witnesses said a firetruck arrived at the Planned Parenthood of Greater St. Louis Region, located on Forest Park Avenue, around 10:45 a.m., and was followed by an ambulance. Roughly 10 minutes later, three Planned Parenthood workers came out of the clinic holding a sheet in front of an unidentified person. The victim was loaded into an ambulance and rushed to a nearby hospital.

“We are unaware at this time of any further information surrounding this ambulance sighting, though we continue to find the occurrence of such sightings notably disturbing,” noted Coalition for Life.

The pro-life group documented the incident with the following images: