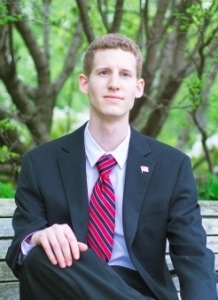 “It starts with us going beyond our comfortable social confines and inviting different people to join us in the defense of all children in the womb. If we, the pro-life generation, don’t do this, who will? Speak and act courageously on behalf of the millions of our generation already silenced. ”  — Daniel DeFonce

Daniel is a 24-year-old graduate of Missouri Baptist University in St. Louis, Missouri. The former president of his campus pro-life club, Daniel has kept up his pro-life work since graduation.

At a young age I discovered the truth about abortion, and how our own justice system validates the killing of pre-born humans. This, and the divine directive to “not be overcome by evil but overcome evil with good” (Romans 12:21), inspired me to serve within the pro-life movement.

After interning with Live Action this past summer, I am now apprenticing with Students for Life of America (SFLA). Within SFLA I am working with the Medical Students for Life program, helping medical students start pro-life campus groups and coordinating a biannual Speaking Tour.

The comments tab or dialogue box on any video, article, or webpage. Commenting over the web in a prudent, factual, and kind manner is an effective way to get other people talking and thinking about the child in the womb. You’re pretty much a red target for trolls and incendiary attacks, but it’s a crazy-fun way to let your light be amplified in oftentimes such a dark, crude, and ignorant environment.

Volunteering is the best! Donate your time and passion to a pregnancy resource center, or pray at your nearest Planned Parenthood (take a friend along, too!). Plan and execute an abortion-awareness event at your place of worship. You can also intern with a variety of pro-life organizations throughout the country, and around the globe! 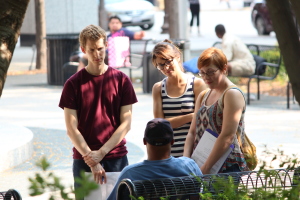 This past August, the SFLA field team and I were trained in advanced pro-life apologetics by the Brahm brothers of the Equal Rights Institute. Afterward we were sent out near the Ballston Common Mall in Virginia to engage with passersby. It was a real adventure!

One young man I talked with initially stated that there is no ultimate morality, and as such, he cannot impose his moral views on those around him, even though he believes abortion to be wrong. It took some time, but I helped him see the reality of moral absolutes based on Truth. He came to understand that morality does exist, abortion contradicts right morality, and any law that goes against the right to life of another individual is evil and must be corrected.

The most personal and intense pro-abortion-pro-life encounter happened at the dinner table. During a family party a couple years ago, we got onto the topic of abortion. I was disturbed to hear that one of my family members considered  truth relative and as such thought abortion was entirely a matter of individual preference. As a result, I had the exciting opportunity to share the pro-life ethic with my entire family, many of whom called themselves pro-choice. Because of this up-close-and-personal opposition, I am now more confident in defending the pro-life stance.

What advice would you give your peers? 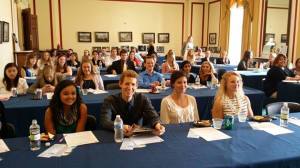 Daniel at a pro-life summer intern briefing in Washington, D.C.

Always take advantage of each opportunity to share the pro-life message with anyone around you – whether with a fellow passenger on a bus-ride, an open-minded co-worker, or a even a pro-choice family member. Think reasonably, speak with grace, and act with sincere compassion for both the mother and the child. Ask a lot of “why” questions to the people around you without being pushy or fake, and always be prepared to give your own answers.

One major hero of mine is the Judicious John Jay, as he is sometimes called. Though a seldom remembered Founder, Jay penned numerous founding documents, and he served as an American diplomat to numerous European countries as the governor of New York and as the first U.S. chief justice. With his constant call for prudent compromise, he always remained immovable in his personal principles, active faith, and lifelong pursuit of justice. Jay exemplified the complete gentleman and statesman, with the virtues of loyalty, humility, prudence, courage, and piety so evident in his career and personal life.

“He who accepts evil without protesting against it is really cooperating with it.”
— MLK Jr., Stride Toward Freedom, 1958

A vast pro-life coalition among every life-affirming non-profit, business, and civil institution would be amazing! 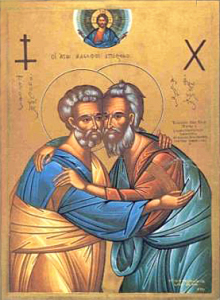 An image of the apostles and brothers Peter and Andrew embracing, with Christ looking over them. This image has long been seen as a symbol of Christian unity, following the model of Christ’s prayer “that they may all be one” (John 17:21).

I would also love to utilize the connections within every Christian denomination to coordinate regular meetings, demonstrations, and conferences for a unified pro-life advancement within culture. A cohesive, synergistic interfaith confederation united by the mutual respect for all human life could be so impactful to society that the media could no longer ignore the pro-life message.

Also, I would invest this money into universities, churches, and civic organizations to be more accommodating to pregnant women.

As an Apostolic Christian, I hope to rally other Pentecostals/Charismatics to the cause of life by igniting pro-life activism. However, I truly seek to integrate not only more Jesus-followers, but also a stronger contingent of Jews, Muslims, Mormons, Buddhists, atheists, and even progressives into the pro-life movement.