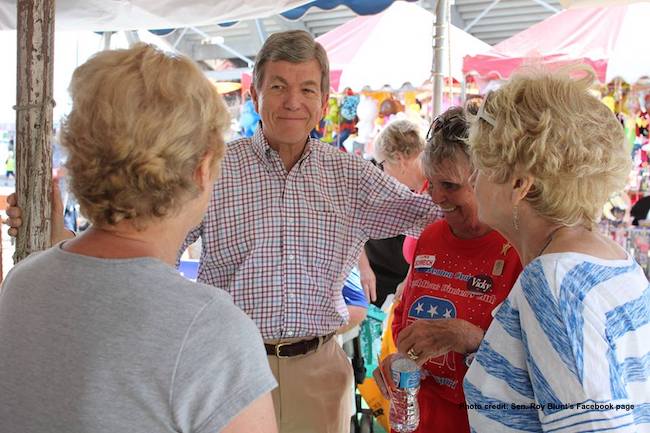 Despite his assertion that he is pro-life, Republican Senator Roy Blunt, chairman of the Senate Appropriations subcommittee, who also serves as the chair of the conservative Senate Values Action Team (VAT), made a deal that supports abortion policies, all in order to gain votes from Democrats.

Blunt’s bargain with Democrat Sen. Patty Murray was seen by many as a sell-out to his proclaimed pro-life priorities. However, he may not have been able to receive the votes he needed to pass his bill without Democratic support, so he chose to compromise his pro-life agenda for the sake of votes.

The bill will allow Planned Parenthood to be eligible for Title X family planning grants, and will also continue funding the Obama administration’s sex-education program which also provided grants to Planned Parenthood — unless it is reversed in the closed-door conference negotiations between the House and Senate late this year.

This is a bipartisan compromise and not the bill that either of us would have written on our own, but I am glad that Senator Blunt and I were able to work together to protect many critical investments in students, workers, women, families, and the economy. I am especially pleased that this bill doesn’t include a single new damaging policy rider. While I support this bill as a compromise and the best we can do given the inadequate investment levels we’ve been given, it underscores the need for us to keep working toward another budget deal to increase investments in people, communities, and economic growth. But this bill is a good first step and a strong foundation for continued bipartisan work.

Murray’s use of the word “compromise” is precisely correct, and in the end, it’s Blunt’s compromise that will compromise the lives of many babies if the bill passes. Planned Parenthood would continue to receive Title X family planning grants, which means more funding for the nation’s abortion corporation. Planned Parenthood’s excess funding (nearly half of which comes from the government) allows the abortion chain to prop up its abortion business and end the life of a new baby every 97 seconds.

Additionally, the Obama-era sex education program that will also continue to be funded through this bill has been shown to be widely ineffective. As Live Action News reported:

President Trump’s budget proposal slated the sex education program, called the Teen Pregnancy Prevention (TPP) program, for elimination. Instead of focusing on the TPP, President Trump’s budget focused on programs which promoted parental involvement and emphasized abstinence. But Blunt’s bill actually “directs HHS to administer the program as it was during the Obama Administration.”

A spokesman from Sen. James Lankford’s office explained that forcing HHS to administer the program under Obama’s rules effectively ties the hands of Secretary Tom Price. The bill would prohibit Price from defunding Planned Parenthood, as HHS otherwise could do — at least through redirecting family planning grants.

As written, the bill does not just provide funding for family planning programs, it also prohibits the Secretary of the Health and Human Services Department from changing the current rules for the issuance of Title X grants. Through this bill, Congress requires the current administration to use the same rules as used by the Obama administration.

Critics say that Blunt agreed to this compromise without attempting to fight for the pro-life provisions. He willingly included the Democratic stipulations in his bill. This meant Murray didn’t have to introduce an amendment, nor was a debate or vote necessary. Blunt’s bargain was at the expense of children, and he did not attempt to negotiate other parts of the bill that were less damaging. Instead, he gave in from the start.

While it’s possible Blunt’s bargain could be reversed in non-public House and Senate discussions of each chamber’s differences on the bill, this is less likely at this point. Because the senator put the language in the bill, rather than forcing the Democrats to add it in, the language is now more difficult to reverse. In short, Blunt’s compromise put rank politics over his purported pro-life principles and the lives of American children.