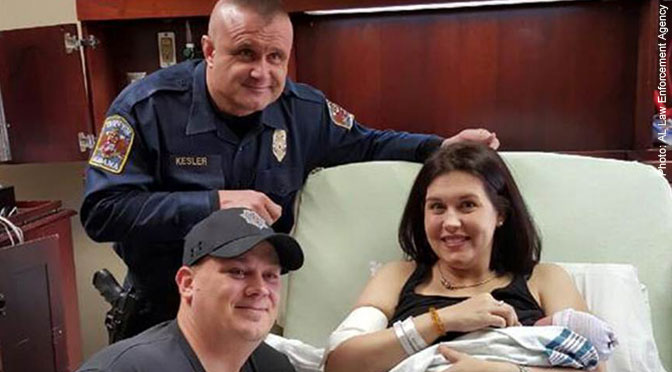 On Sunday, Alabama State Trooper Michael Kesler pulled over a speeding vehicle in what he thought would be a routine traffic stop. But it turned out to be much more exciting than that.

After pulling over the speeding vehicle to the side of the highway, Kesler realized that the woman in the passenger seat, Shawna Lowe, was in labor and about to give birth. Kesler immediately went into action, and helped in what turned out to be a rather quick delivery.

“She pushed, and I caught him,” he said. “That’s pretty much how it went.”

But it didn’t end there. After helping with the delivery, Kesler then helped keep the baby warm, and ensured that the family made it safely to the hospital with their new baby boy, 6-pound, 19.5-inch Barrett. Later he brought the new parents flowers, cupcakes, and a newborn starter kit.

In a statement, Alabama Secretary of Law Enforcement Spencer Collier praised Kesler for his work in going the extra mile to care for Barrett and his parents. Collier is a former Alabama state representative with a history of promoting and protecting life at all stages of development.

“Trooper Kesler’s actions today exemplify the mission of the Alabama State Troopers — to serve and protect. I want to personally commend Trooper Kesler for his swift actions and going above and beyond the call of duty,” Collier said.