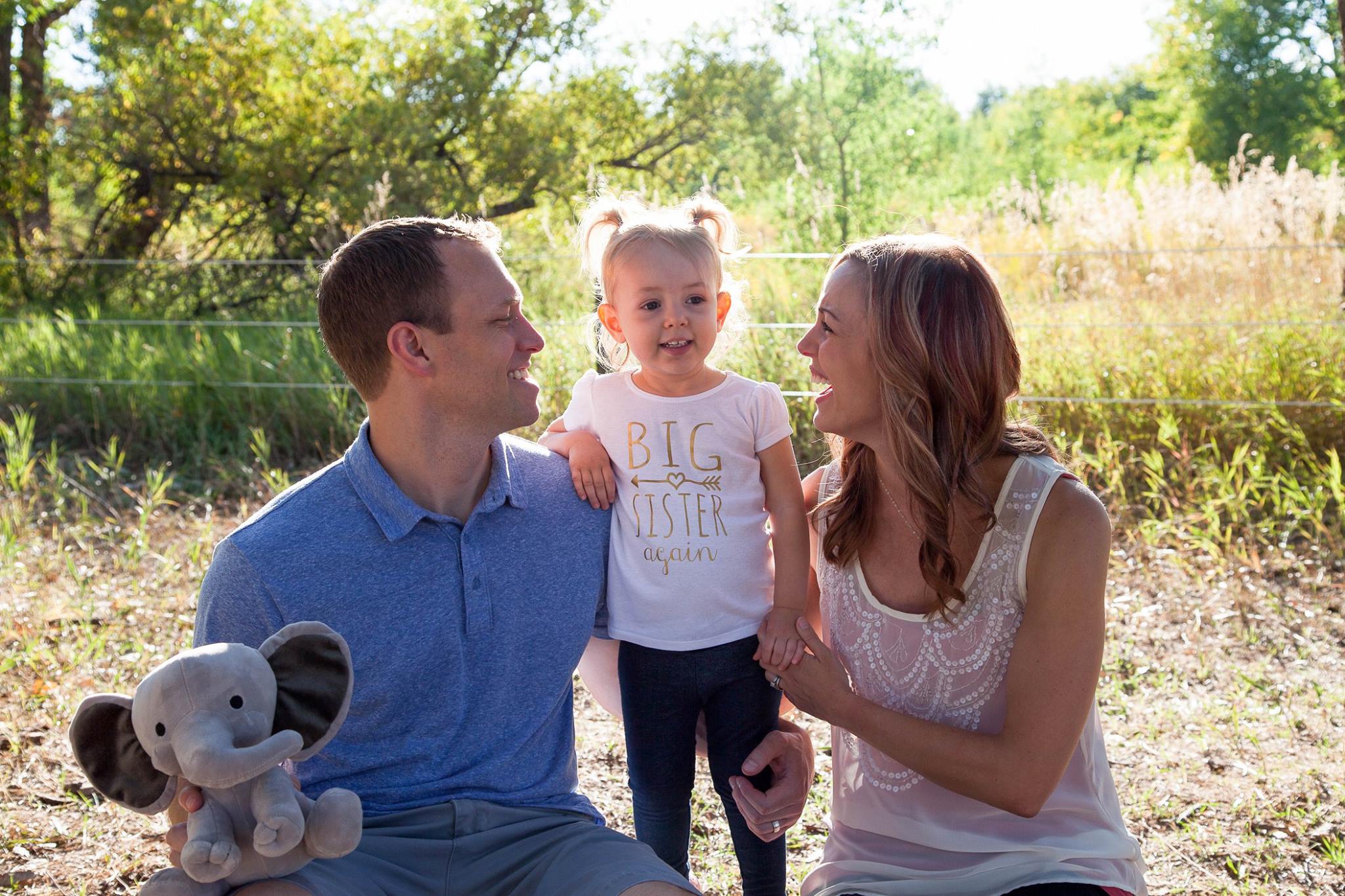 When Shannon Ackerman and her husband Jon first learned that their second child was not going to survive outside of the womb, they were heartbroken. Already parents to a little girl, Callie, they longed to build their family and were excited to be expecting a son they named Eli. But at an appointment with their OBGYN, they learned Eli had a rare condition and they would have to say goodbye to him shortly after his birth. Tragically, less than a year after losing Eli, they lost their third child, Joey, to the same condition.

“Each of our diagnosis days were the hardest days of our lives – I can only describe them as ‘chaotic despair,'” explained Shannon. “For Eli, our first son and second child, we were completely blindsided by this news – we were in for a routine appointment after several good appointments. Nothing made sense. Too many complicated medical terms and ‘suggestions’ on how to proceed. So many dreams dashed, yet so much hope that doctors were wrong and praying for a miracle.”

During Shannon’s pregnancy with Eli, the Ackermans were unaware that they were carriers of a very rare recessive gene. In fact, they still didn’t know what caused Eli’s condition until a few weeks after they buried him. Shortly before his birth, the doctor suggested genetic testing because she suspected Meckel-Gruber Syndrome — the condition Eli and Joey would later be diagnosed with. Learning what had caused Eli’s death was a painful blow.

“We had thought it may have been a random circumstance, so to hear that they thought it could be a genetic condition was very hard to process,” explained Shannon. “It means, for us, that life is just that much more complicated. Not only do we feel the weight of this as we visit our baby graves, but now getting pregnant and ‘planning’ a family is just complicated. Medically speaking, we have a 25% chance of our babies having this genetic condition, but a 75% chance of healthy children like our 2-year-old daughter. I’m sure there were people who were skeptical of us choosing to have another child after losing Eli (one doctor even told us in the hospital room just hours after meeting Joey that we could have had our Joey tested earlier, suggesting that we didn’t have to be in that situation again). But overall, we have felt incredibly supported and encouraged by our ever-expanding community.”

Meckel-Gruber Syndrome can include symptoms such as protrusion of the brain through a hole in the skull, cysts on the kidneys, extra fingers or toes, and problems with the liver, lungs, and heart. Many children die while still inside the womb, though some live for a few days after birth. Because it is an autosomal recessive condition, the Ackermans face a one in four chance that any of their children will have the condition.

Shortly after losing Eli, the couple decided to try for another baby and were hopeful that Joey would be born healthy like his big sister. However, when it came time for an ultrasound with Joey, the Ackermans knew what the signs of Meckel-Gruber Syndrome would look like on the screen. They had seen it with Eli, and they prayed that it wouldn’t be there with Joey, but it was.

“We had also had several healthy appointments previously, but with all the faith we could muster up, we were believing for a healthy report. When we saw that Joey had the same fatal condition as his big brother, it felt so much heavier as we knew what the outcome out be,” said Shannon “We knew, unless we got a radical miracle (which is what we still prayed for), we would be burying our second child. It was so much harder the second time around.”

When they had first learned that Eli would not live, doctors offered termination as an option for the couple. But the Ackermans refused. They wanted Eli with them and living his life for as long as possible, and they felt the same way with Joey.

“To be very honest, the D-day for Joey was full of such despair, I couldn’t fathom how I could carry another baby that we knew we’d have to bury,” said Shannon. “Ultimately though, we knew God’s best for us meant honoring the life I was carrying for as long as we could. I don’t know if I can say most of the high-risk doctors were overly ‘supportive,’ but they were ‘respectful’ of our decision and did not push another agenda on us. Every so often, there would be a small suggestion like inducing much earlier than we were ready for, but once they heard our wishes, they were respectful and worked with us.”

Eli was born on March 16, 2016. Despite their heartbreak, the Ackermans decided that they wanted to honor Eli in a special way. Quite simply, like any parent, they don’t want their son to be forgotten, but unlike all other parents, on the 16th of every month, the family heads out together to celebrate Eli’s life by helping others through acts of kindness. They call this “#theEliEffect.” In just the one year that they have been spreading acts of kindness, strangers across the country have joined them.

“I can’t describe how it blesses this momma’s heart to see others join in on finding ways to bless others. There have been children who save up their money to buy flowers and give them to neighbors just so they know they are loved. An entire high school in Florida adopted a day called, ‘The Eli Effect,’ and painted rocks with encouraging statements to place around the community and found ways to honor fellow students, from opening doors, inviting others to sit with them at lunch, and writing kind notes to each other,” Shannon explained. “Preschoolers handing balloons out, kids sidewalk chalking the area by community mailboxes to bring cheer, people bringing treats to fire stations. Donating to non-profits. So many people have bought coffee or purchased meals for others. It is amazing to see people grab hold of blessing others and just loving on people. With so much negativity in our face all the time, that’s what our world needs more of. The Eli Effect is bigger than we are, and we are privileged to just be a small part of it.”

Joey was born on January 17, 2017, and to honor him, his parents have coined the term “#beJOEYful” because Joey taught them to find joy even in the midst of all of the pain they have suffered and continue to suffer. On the 17th of each month, they find ways to be joyful in honor of Joey.

“Our natural eyes still see so many ashes – we have two graves to visit and only one crib to fill – but Joey taught us to see that there are already pieces of beauty in those ashes even as we long to see the fullness of that beauty in the future,” said Shannon. “And so, we dedicate this day to joy, whether that looks like intentionally creating spaces in life that bring joy (like picnics in the living room with our two-year-old daughter), or acknowledging the existing fragments of joy that can be so easily overlooked like the silliness of our daughter or just holding hands with our love. The joy of the Lord is our strength.”

Carrying out joyful and kind acts in honor of their sons isn’t just something that makes the couple feel good. It goes beyond simple acts of remembrance. It allows their sons to make a difference in the world even though they aren’t physically able to be a part of it. So many parents take for granted watching their children grow up and make friends and head out into the world to make their mark. While the Ackermans won’t get to experience all of the joys of raising Eli and Joey, they have discovered a miracle for themselves.

“Every parent is proud when they see their child making an impact,” Shannon told 9News. “That was something I thought would be a dream I’d have to put away. I’m realizing I don’t.”

While Shannon knows that no parent wants to create a “comfort plan” instead of a “birth plan” or make funeral arrangements instead of designing a nursery, she says her family has found “a sweet, unexpected beauty” since losing their boys. At the suggestion of their doctors, they contacted an organization called String of Pearls, which helps families navigate that “sacred path between grief and hope.” String of Pearls was able to provide the Ackermans with real-life, thoughtful suggestions as they searched for ways to honor their sons.

“One of the phrases I held on to throughout both pregnancies was, ‘love with no regrets.’ And we have been realizing the fullness of that phrase ever since diagnosis day #1 – well beyond the pregnancies and funerals, but in day to day life,” Shannon shared. “We are inspired to love unguarded. We want our lives to be marked with love, generosity, compassion, and kindness. We can say, without hesitation, that we are better because of our boys. I am so thankful for them, and it has been a tragic privilege to say hello and goodbye to them in the same breath. I love them just as much as I love my daughter that is here on earth; they are all my beloved children. Throughout our journey, we have found that God has given us exactly what we need, when we need it. Yes, we know the deepest pain and the hardest tears, but we know that ultimately, our story is a story of grace and hope.

And, our story is not over yet – it is still being written.”