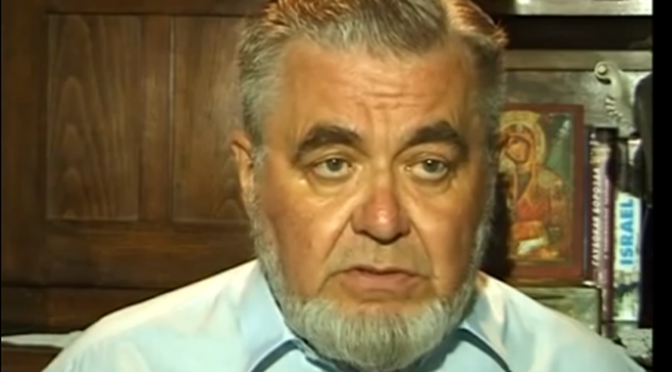 I look, and I see a human heart, contracting and expanding and beating, beating, beating. I thought I would go mad. I can see that the heartbeat is slowing, ever more slowly, and more slowly still, until it finally stops completely. Nobody could’ve seen what I had seen with my very own eyes, and be more convinced than I was — I had killed a human being.

Stojan Adasevic’s journey from abortionist to pro-life advocate was long in the making. It is estimated that he personally performed about 55,000 abortions. According to “The First Hour,” a documentary about Adasevic’s life, about 53 million abortions occur annually worldwide, and at the time of the making of “The First Hour,” there were about 6 billion people in the world, with over 1 billion abortions having taken place in the previous 30 years. Death estimates of these proportions usually get our attention, and society finds them shocking and heartbreaking. We have estimates for the number of people executed under Hitler’s rule – about 12 million. The 1994 Rwandan genocide resulted in about one million deaths over three months’ time. While these and other modern atrocities were carried out in different ways, by different people, there is one thing they have in common: the dehumanizing or devaluing of human life, which made it easier to take those lives.

For example, Hitler’s “Final Solution” targeted Jews in order to annihilate them, and his euthanasia program targeted handicapped people; he branded different groups of people as being “subhuman” and then killed them for it. The amount of propaganda Germans were fed about Jews was substantial. The propaganda specifically attacked the humanity of a specific group of human beings, labeling Jews as “parasitic vermin.” Nothing about that phrase brings human life to mind. Similarly, the documentary “Sometime in April” details the events of the Rwandan Genocide and explains how Hutus, the tribe that attempted to wipe out the Tutsi tribe, refused to call Tutsis anything except “cockroaches.” The Hutus used that term for the Tutsis in their propaganda as well – over the radio waves and in their writing, music, and everything else. If one group of people begin to believe that another group of human beings are actually just a group of cockroaches, what’s so wrong about “exterminating” them?

A similar mindset was fed into the training that former abortionist Stojan Adasevic received:

They taught us and they taught us, told us that life began with the first cry … up to that moment, a human being is like any other organ in a woman’s body, like an appendix. The removal of an appendix from a mother’s body is not murder[.] … [If] it hasn’t cried, then there can be no talk of murder. That is why, immediately after birth, children were taken and their heads submerged in a bucket of water. A child that would take in water instead of air. And would never cry. That was, therefore, not regarded as murder. Terrible, but that was how things were.

For many years, Adasevic firmly believed he was simply removing “post-natal tissue” from women, not ending lives.

He explains how the ninth gruesome abortion procedure performed for one woman finally convicted him of the truth:

I got to work … with my abortion forceps. I grabbed something, crushed it a little, removed it, and threw it onto a cloth. I look, and I see a hand – quite a large hand. The child was three, perhaps four months old[.] … Someone had spilled some iodine on a part of the table and the hand fell in such a way that the nerve endings came in contact with the iodine … I look and I say, ‘My God, the hand is moving by itself.’

I nevertheless carry on with my forceps, and again catch something, crush it, and pull it out[.] … A leg…the leg…fell next to the hand. I look – both hand and leg are moving by themselves. I nevertheless, once again, direct my instrument into the womb, and begin to crush everything inside. I think to myself that all I need to complete the picture is the heart. I continue to crush, and crush…till I am sure that I have ground everything inside into a pulp, and once again pull out the forceps.

The devaluing and dehumanizing of human beings has led to countless unnecessary deaths. Society has no problem recognizing this fatal aspect of the Holocaust and other genocides. Why can’t we recognize it in the abortion of our children?