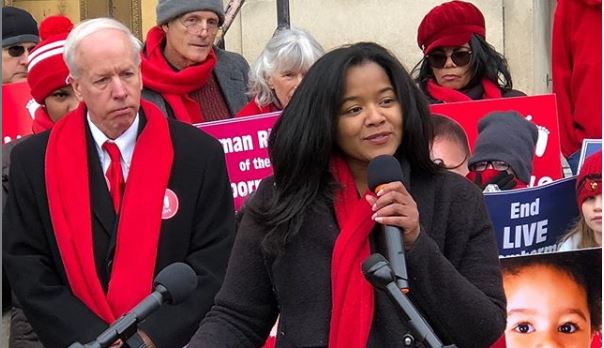 In October of 2018, CNN “United Shades of America” producers invited Students for Life Appalachian Regional Coordinator and Minorities Outreach Regional Coordinator Elizabeth Parker, an African-American pro-life activist, to participate in an interview for their episode on “both sides” of the abortion debate. When the episode aired May 19th, not only was Parker’s interview cut, there was also virtually no representation of the pro-life side at all.

“I’m very disappointed at the dishonesty exhibited by the people who asked me to take time out of my schedule to do this project,” said Parker in a Students for Life press release. “They said that the goal of the episode was to take a look at both sides of the abortion debate. I went, gave them my time, and got cut for my trouble – as did the rest of the pro-life invitees. Clearly, they only wanted to portray abortion positively.”

Apparently, Parker’s name is one the mainstream media would rather forget. Back in February, she helped Mississippi Valley State University launch the first Students for Life Group at a Historically Black College/University (HBCU).

Parker told Live Action News, “It’s disappointing but not surprising that CNN cut a voice of truth out about the other side of abortion that the pro-choice side doesn’t want you to know. We came to the interview upon an invitation in good faith to have a genuine discussion about what it means to be pro-life in this day and age.”

“We were told that our voice was wanted, to help shed light so that both sides could be heard,” Parker added. “Instead we showed up to the equivalent of a fixed card game, and unfortunately another loss on the pro-choice side to have a genuine dialogue about the truth about abortion and how it has affected so many communities, especially the black community, negatively. ”

In direct contrast to the popular narrative that abortion is an unqualified good for women, Parker’s Students for Life profile reads: “my unique calling is… towards the minority student community. It’s important for them to understand how abortion has devastated the lives of our family, friends, and neighbors. Not to mention, we want them to know why it’s so vital to play an active role in bringing abortion to an end, so that when the time comes, they will not only find themselves on the right side of history, but also see how their active efforts have shifted the tide for generations to come.”

While the mainstream media only rarely makes mention of African-American pro-life activists, Parker is far from alone. Live Action News previously highlighted four African-American pro-life leaders outraged that black women abort four times more often than white women (25.1 abortions per 1,000 black women vs. 6.8 abortions per 1,000 white women) and that 79% of Planned Parenthood’s surgical abortion facilities are located in minority neighborhoods. They have each taken on leadership roles to stand up for the rights of all women and children. DJ Carter is the executive director of Pregnancy Centers of Central Virginia, Dr. Alveda King is the director of Civil Rights for the Unborn, Roland Warren is the president and CEO of CareNet, and Christina Bennett is communications director for Family Insitute of Connecticut and Live Action News contributor.

When the media silences pro-life views, they are not only failing to do their job appropriately and to the best of their abilities, but they are also failing their viewers who expect to be given the entire story.