Emily-Anne Buck  is a fantastic example of what can be accomplished wherever one is in life.  As a wife, a mother of two boys, and a pre-trial release officer at the local sheriff’s office, Emily-Anne makes sure she has time in her schedule to help build a culture of life in her community.  The families at risk of being destroyed by abortion in Knoxville, Tennessee can thank Emily for continually working to defend and support them.

After months of reading sites like Live Action and LifeSiteNews, I had had enough. I couldn’t get through another article without feeling so much anger, confusion, and hurt. I knew that at that moment, only a small percentage of the world truly knew what was going on in the abortion industry, and as hard as it was to stomach it, I needed to get a tough skin and share with others what is really going on.

I remember my pastor saying once, “If people sin, does it make you angry, or does your heart break for them?”

I knew in that instant, my heart broke for those who aborted their children. I was angry with abortion in and of itself, but felt that some of these moms and dads who choose to kill are misinformed and need help desperately. 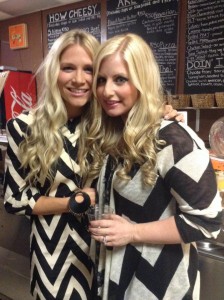 Emily and her friend, Melanie.

I started with a pro-life blog. I then joined with another to hold a fundraiser for our local group here, called Hope Resource Center. We raised over $250 for HRC to give baby showers to those young moms who consider abortion yet choose life. HRC does its own fundraisers and has baby showers each semester, yet I was so glad God could use me and another to help even more!

I also started a side job in Rodan+Fields and decided that I would tithe my earnings each month to Hope Resource Center.

I also support life by participating in 40 Days for Life.

I guess that would have to be Facebook. I use articles I read and life circumstances to build my knowledge, and when I feel that the Lord is leading me to write, I write my blog!

I met a friend over dinner I had not seen in months. We had a fabulous time! In the middle of our conversation, she looked and me and said, “I know your stance on this, so I’m nervous, but…”

And that is when she told me she aborted her child when she was 19 years old. She is a married mom of 2 in her 30s now, and a Godly woman!

This was a shock, of course, but we cried and shared, and she told me she never liked or commented on my blog for fear some who may know her secret would call her a hypocrite. But she said she did read every post, and it meant a lot to her. She had been told by the abortion facility that the baby growing inside her was not actually a baby yet.

I had an old sorority sister try to argue on a post on FB. A guy friend of mine and she went at it. Finally, after a day or so without myself getting involved, she politely stated to the guy friend, “I really wanted Emily-Anne’s opinion on this, not yours. And I would appreciate if she would private message me.” 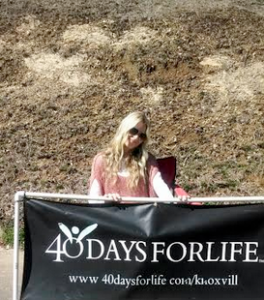 Emily volunteering with 40 Days for Life.

I know that God has just started me on this journey, and as my husband says, “If you are going to work in this movement, you have to have a tougher skin.”

Sometimes I let things bother me, so I’m trying to trust him and his will for me in this movement.

Find even the smallest thing in your community to get involved! I was shocked by how many people didn’t know we had the awesome organization here in Knoxville called Hope Resource Center.

Abby Johnson. She is what Jesus is all about.  And with her head held up, she is a warrior for life .

“I feel the greatest destroyer of peace today is Abortion, because it is a war against the child… A direct killing of the innocent child, ‘Murder’ by the mother herself… And if we can accept that a mother can kill even her own child, how can we tell other people not to kill one another? How do we persuade a woman not to have an abortion? As always, we must persuade her with love… And we remind ourselves that love means to be willing to give until it hurts…” – Mother Teresa

Pour it into our community and our churches! We need more church resources to love on the post-abortive women and to teach the young minds the truth.

Through this journey I received an e-mail about a film to be produced called Voiceless. I reached out to the producer wanting to help. He said it was limited to pastors but wanted to talk with me to hear my story.

After talking to Stuart out of Philadelphia, he gave me the password to their movie script! He called me the “leader of Knoxville” and wanted me to seek pastors in the community to get on board with and support their film, which is to be released in 2015!