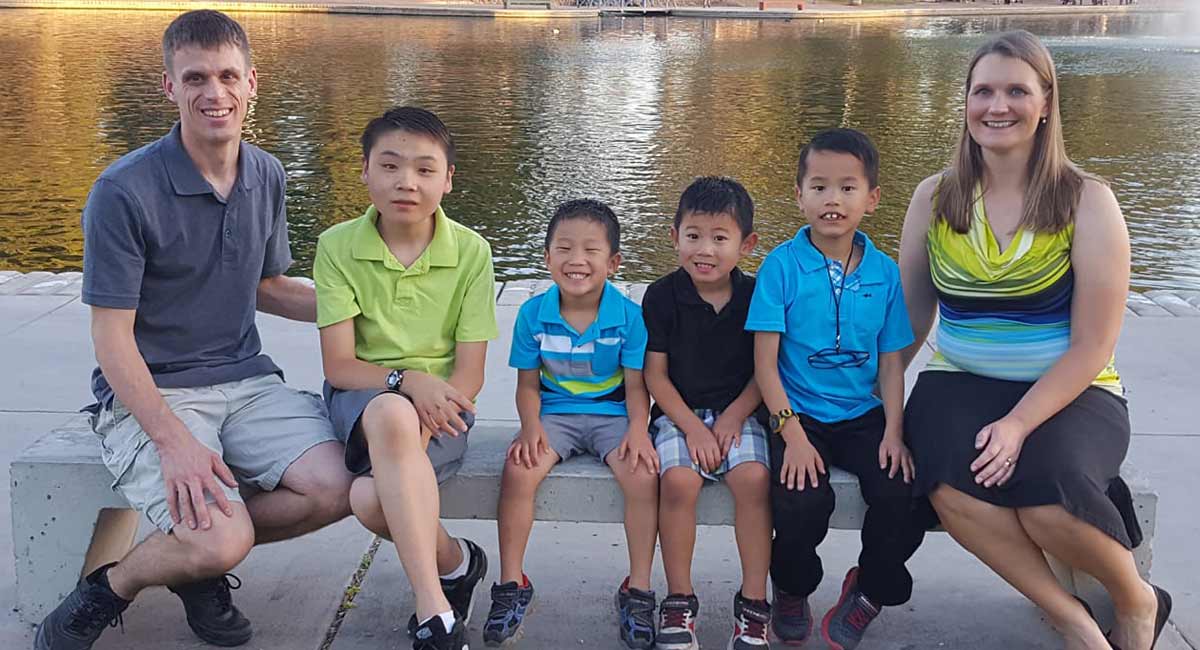 Kristi and Matt Smith are the parents to four rambunctious boys brought together by a rare condition. NPR recently shared the unique journey that brought the Smiths their four sons, who were all adopted from China and all have rare genetic disorder called phyenylketonuria, often called PKU.

Adoptive mom Kristi has PKU, and her parents tried to make her life as normal as possible throughout her childhood. People with PKU can’t break down an amino acid called phenylalanine, which is found in all protein. A buildup of phenylalanine in children with PKU can cause brain damage, which is irreversible, and intellectual difficulties in adults with PKU. In order to prevent these dire consequences, people with PKU must maintain a strict, low-protein diet, carefully monitoring protein consumption and drinking medical-grade formula for supplementation.

“A glass of milk is actually one day’s worth of my protein intake that my body can handle,” Kristi explained. Maintaining this low-protein diet is not easy. A specialty box of low-protein pasta costs the Smiths about $12.

Despite the difficulties of her condition, Kristi was able to excel in school and became a nurse. After a few years of marriage, Kristi and Matt discussed how to grow their family. They decided on adoption and were open to adopting children with PKU, because they were well versed in the care required for the condition. What they didn’t expect was that the child they would find would be in China. And they found several children.

In 2015, Matt and Kristi flew to China and adopted two 2-year-old boys, both of whom have PKU. There were many unexpected challenges that came with raising toddlers on a strict diet, but the boys developed and are thriving.

The journey was not over for the Smiths, and Kristi knew they should adopt another boy, Caleb, whom she discovered through her advocacy work for PKU adoption. While they worked to adopt Caleb, the Smiths became concerned for another child, Ben, who was about to age-out of the adoption window in China, which legally ends at age 14. Both Caleb and Ben have PKU, and Ben had not been on a PKU diet, meaning that he likely had permanent brain damage, which can result in a wide range of disabilities. Kristi and Matt decided to fly to China again, and just one month before Ben’s 14th birthday, they adopted both boys. At the time, Ben was nonverbal.

The Smiths chose to adopt children from the other side of the world who face the many challenges of a rare condition that they know well. Kristi says, “I felt like we had the resources that it took to care for these children and to not was just selfish on our part.” Today, the boys continue to thrive; even Ben has started sounding out English words.