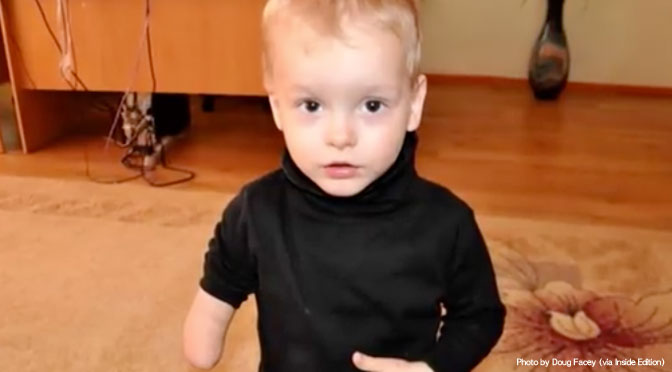 The beautiful story of an adopted boy with a disability has gone viral after photographers captured the moment his adoptive grandfather – who has the same disability – met the child. Little Kirill was placed for adoption by his biological family when he was just 20 days old. It took his adoptive parents Doug and Lesley Facey three years to adopt the four year-old from an orphanage in Kazakhstan but they were thrilled when they were finally able to pick him up and take him to his new Canadian home. By the time the Faceys got Kirill, he had been passed up for adoption six times because he was born without a hand. Doug Facey told Fox 6 that when he expressed an interest in adopting Kirill, the adoption agency questioned him, repeatedly asking if he and his wife really wanted a child with only one hand.

At the age of four, Kirill spent his life thinking there was no one else like him. That is until he met Doug’s father, his new adopted “Grandpa,” Chris Facey. Doug told ABC News about the moment his new son met his dad and the touching encounter was captured in the image below. “I was excited when Kirill met my Dad,” Doug said. “I knew it would be a great thing for him because Kirill would realize he was not the only person in the world missing a hand.”

Doug described the first time his dad saw a photo of Kirill. “Dad’s reaction was emotional the first time he saw a picture. His first words were, ‘He’s like me,'” Facey told TODAY.

“My Dad’s reaction was one of excitement as well because he could show [and] teach Kirill that the sky is the limit and he can do whatever he wants.”

Lesley Facey said that the media attention her family has received has been tremendous. “A lot of people are saying, ‘You guys are wonderful and you guys have done a fabulous thing,’ but Doug and I never, ever thought that way,” she told Canada’s CBC.

Lesley thought back to the concern others had when the couple adopted Kirill, telling Fox6 that she knew no disability would hold her son back because it did not hold back his new grandpa:

How can I sit there and say ‘this is gonna be a problem’ when you’re looking at this man who’s been to the Paralympics, who played soccer, he’s a great philanthropist in the city, he’s a very successful businessman. How can you sit there and say ‘my child won’t be able to do any of that?’

Kirill’s new grandpa agrees, noting that when he met his grandson for the first time, “I didn’t see a little boy who was disabled and missing a right hand.”

Doug said that he and Lesley are happy that now their son can just be a kid. They told the media that adopting Kirill has changed their lives and that they are happy to “have a little boy to love, cherish and educate.”

“He’s going to get the best chance to be the best he possibly can. He’s bright, he’s smart … He’s a keeper,” his grandpa added.