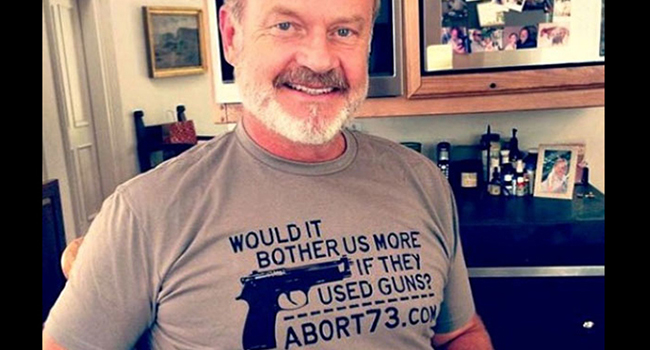 In 2015, actor Kelsey Grammer — best known for his role as Dr. Frasier Crane in “Frasier” and “Cheers” — ruffled pro-abortion feathers when his wife Kayte posted a photo of him wearing a pro-life t-shirt on her now-defunct Instagram page: 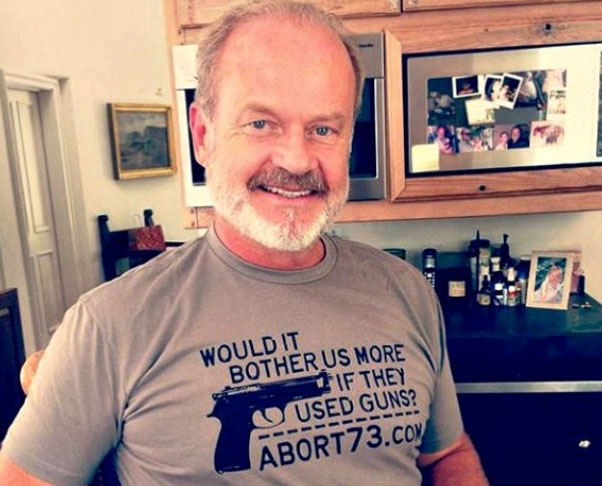 While the Huffington Post called the pro-life t-shirt “bizarre,” the shirt is known among pro-lifers and is from Abort73.com. It states, “Would it bother us more if they used guns?”

According to LifeNews.com, Grammer and his wife also posted a quote from (then-GOP presidential candidate) Dr. Ben Carson on Instagram, which read, “We’ve distorted things to the point where people believe that anyone who opposes mothers killing their babies is waging a war on women. How can we be so foolish to believe such a thing? One must be able to recognize the depravity to which we have sunken as a society when valuing a baby’s life is frowned upon.”

According to a later LifeNews.com article, Grammer and his wife Kayte attended the March for Life in 2016, with Kayte later posting on her Instagram page, “There are better ways to avoid pregnancy than abortion. We advocate those. We can respect a woman’s right to choose and respect a child’s right to life at the same time. They do not need to stand in opposition. We need never kill another innocent life. Respect life.”

Abortionists don’t use guns to kill children. They use suction catheters and surgical instruments and sopher clamps and dilators. And because it is considered a “surgical procedure” and because it is legal, many people never think about what’s really going on during an abortion:

Grammer himself has experienced the injustice of innocent life taken. His sister was brutally murdered by a serial killer in 1975 at age 18, and prior to that, his father was killed in a home invasion when Kelsey was 13 years old.

Grammer is one of the few Hollywood celebrities who unashamedly affiliates himself with the pro-life cause. According to a previous Live Action News report, Grammer once said, that the term “reproductive rights” is “dishonest” because “you clearly have a choice well before a baby is conceived. If someone has to die as a result of rape, then we should kill the rapist — not the unborn child.” Grammer and wife Kayte have three children together, and Grammer has four other children from previous marriages.

Other notable pro-life celebrities include Kathy Ireland, Patricia Heaton, Tim Tebow, and Martin Sheen, and many others.