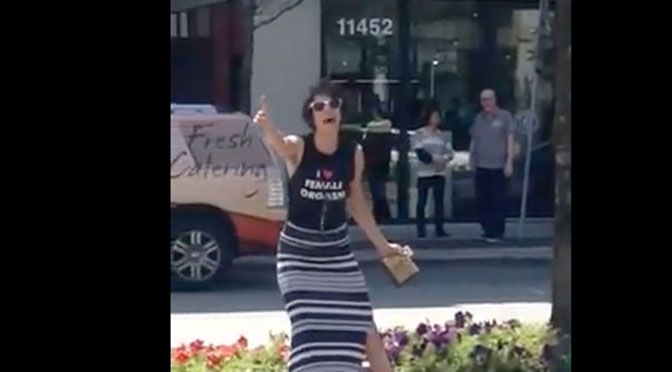 For many stalwart abortion activists, abortion is almost viewed as a sacrament. It’s referred to as a social good, something that women should see positively. Abortion, to them, is what allows women to accomplish anything — without abortion, women would otherwise be useless and powerless, they claim, victims of biology and chained to the kitchen, all because of the inability to kill their own preborn babies. Still, this mindset is typically kept quiet. Publicly, abortion activists tout platitudes about how abortion is a difficult decision that no woman ever wants to have to make, yet we should accept her “choice.” (Remember the idea of “safe, legal, and rare”?) It’s only been recently that the abortion lobby has become more vocal about how they really feel.

While conservative pundits Milo Yiannopoulos and Ann Coulter held a joint book signing during the Republican National Convention in Cleveland, abortion activists held a protest outside. But it was what one woman shouted that garnered some attention…

While she made her admission, the pro-abortion feminists standing near her cheered.

It wasn’t entirely surprising that abortion activists would show up to protest, considering that the GOP just adopted the most pro-life platform in history. But this kind of protest is a common mistake made by the abortion lobby.

Presumably, the goal of a protest of any kind is to draw attention to your cause, and, more importantly, to get people to join you. Yet somehow, abortion activists seem to continually try to be as offensive and shocking as possible. Does a stunt like this get attention? Absolutely. But will screaming about getting an abortion on Good Friday — likely added for the shock value alone — convince pro-lifers to suddenly begin supporting abortion? The idea is ridiculous when you think about it.

The goal of the pro-life movement is to change hearts and minds on abortion through education about the risks of abortion to women, about the facts of preborn human development, and about the corrupt and deceptive nature of Planned Parenthood and the rest of the abortion industry; this pro-abortion extremist’s goal was to offend as many of the pro-life Republicans at the convention as possible. Maybe it was because of the recently adopted pro-life platform; maybe it wasn’t. Either way, she had to know that offending people would be all she accomplished.

But if that is all she was aiming for, it was a huge mistake. Because winning one battle may feel sweet, but it doesn’t feel as good when you ultimately lose the war.