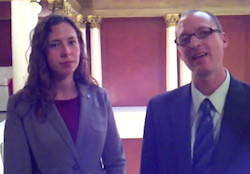 In response to the Grand Jury Report which investigated Dr. Kermit Gosnell, Pennsylvania State Rep. Matt Baker introduced a bill that holds abortion clinics to the same standards as ambulatory surgical facilities, including the requirement of a nurse’s presence during procedures.

Gosnell is the abortion doctor who, according to District Attorney Seth Williams, “Induced labor, forced the live birth of viable babies in the sixth, seventh, eighth month of pregnancy and then killed those babies by cutting into the back of the neck with scissors and severing their spinal cord.” He is facing eight murder charges for the deaths of seven babies and one woman, Karnamaya Mongar, a patient. Gosnell is also named in multiple civil suits, including one concerning the death of a young woman following an abortion. While the need for regulation is clear, the ACLU and Planned Parenthood are strongly opposing the bill. In a video posted on Facebook, Andy Hoover, legislative director of the ACLU of Pennsylvania, and Sari Stevens, executive director of Planned Parenthood Pennsylvania Advocates, complained that the bill is an attempt to put abortion providers out of business. This complaint, however, contradicts sworn testimony.

On page 162, the Grand Jury Report states, “The legitimate abortion providers who testified before the Grand Jury told us that they already comply with standards as demanding as those for ASFs [ambulatory surgical facilities]. Abortion rights advocates told us the same thing – that licensing abortion clinics as ASFs would not be burdensome because clinics that are members of NAF, or associated with Planned Parenthood, already comply with the highest standards of care.”

“Why do they feel that they should not have to undergo the same patient health safety standards as other facilities, this just defies logic. People go in to have anesthesia and surgical abortions and you’re saying there shouldn’t even be a nurse? It doesn’t make sense,” Rep. Baker told PoliticsPA. “That just shows how out of touch, and unrealistic and uncaring, quite frankly, that they are towards the very women that they seem to be saying would be hurt by this legislation,” he added. “I would say that they’re hurting women physically as evident by the atrocities witnessed at the Gosnell abortion clinic.”

Can anyone really be surprised by the reaction of the ACLU and Planned Parenthood? The abortion industry is showing its true colors.