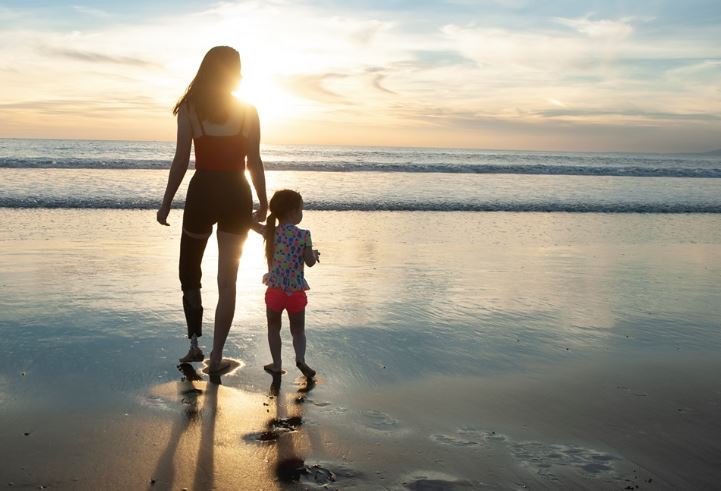 After a horrible motorcycle accident nearly severed her foot, Caitlin Conner learned at the hospital that she was pregnant. Rather than risk harming her preborn child, Conner made a decision of sacrifice and love.

In June 2014, Conner and her husband, Jaylon, married just two months, went for a motorcycle ride. According to KHOU, that ride near Fort Worth, Texas, was a short one-mile trip to see Jaylon’s mom who was recovering from her first round of chemotherapy. What should have been a pleasant ride almost cost the couple their lives when a teen driver texting at the wheel swerved into their lane and crashed into them.

“We got away,” Conner said. “We got into that right lane as far as we could and she just kept coming.”

The accident threw the couple from the motorcycle, causing severe injuries for both. In the hospital, as doctors worked to save her partially severed foot, they discovered Conner was four weeks pregnant. Conner told KHOU, “I didn’t have time to worry about how I felt. I needed to focus on her.”

Her daughter, whom she named Tinley Ryan, became Conner’s focus. She refused further leg surgery and had her leg amputated below the knee. While at home, she took limited pain medication to minimize risks to her developing daughter.

Conner made it her goal to learn to walk with a prosthetic leg before her daughter’s birth. She faced multiple setbacks but succeeded in her goal.

Two years after the accident, Connor told KHOU, “We’ve got God to thank. You know we’ve survived this. We’re here for a reason. Wouldn’t put us through anything we couldn’t handle. I think it has a lot to do with going through a lot of loss at once, and realizing you still live. You still survive.”

In addition to the accident, in recent years, Conner and her family have faced the loss of a brother, her step-father, and her mother-in-law to cancer.

“We all go through trials in life. We all overcome them. I understand that I can overcome them. And that it just defines me and gives me character. And I’m OK with that. My scars make me who I am,” she said.

In the years since, Conner has not only survived but learned to thrive. According to ABC 13, “Caitlin has competed in seven triathlons, two relays, completed the Houston Half Marathon, medaled in the U.S. Paralympics Track Cycling Nationals, become the world’s first female amputee boxer and is on her way to becoming the world’s first female amputee speed skater. She’s also modeled for several brands, including Target, and founded the non-profit ‘Be More Adaptive’, which aims to empower the adaptive community.”

READ: Teen mom diagnosed with cancer while pregnant has died

Discovering her daughter in the aftermath of the accident spurred Connor on in her long and difficult road to recovery and the many remarkable things she has done since. Connor recently told Metro, “As soon as I learned I was pregnant, I had someone else to take care of, so I didn’t focus on myself. Everything was about the baby. My leg didn’t define me as a person, but the baby would.”

Ultimately, she sees the devastating accident as an opportunity in her life, saying, “The best thing you can do in life is try! I was so complacent in life before and it shouldn’t have taken the losses it did to start living life.”