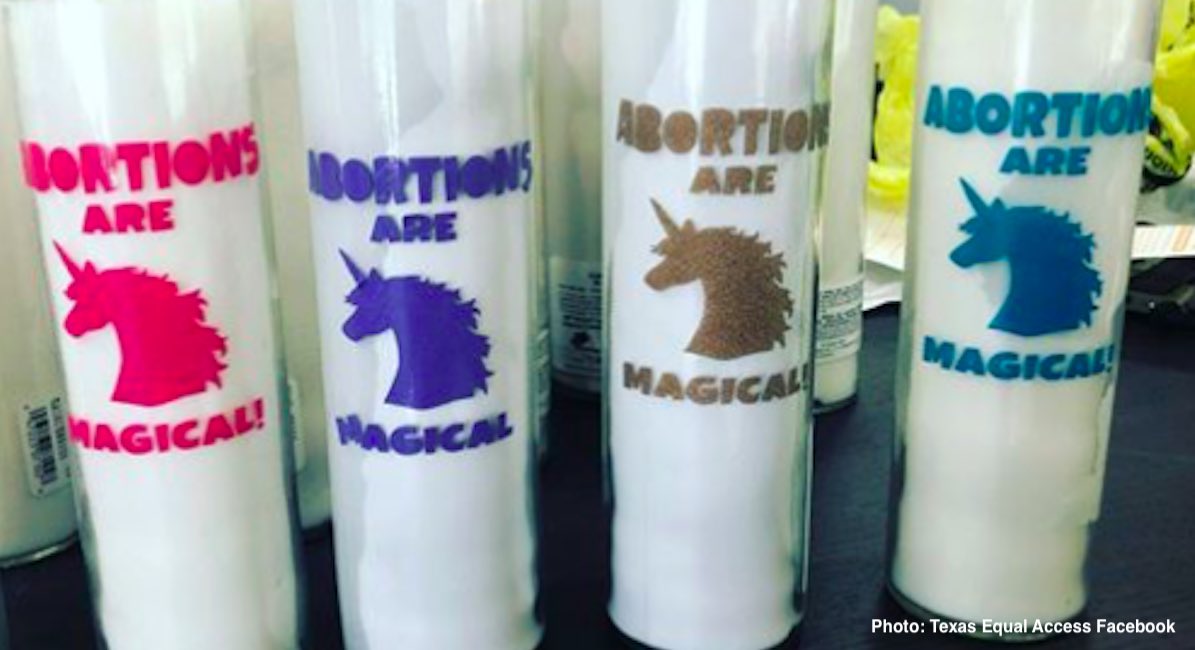 I recently saw a post from the Texas Equal Access Fund, a organization that raises money to partially cover abortions for women in Northern Texas. In the post they gleefully discuss their holiday party favors and share a picture of candles with brightly colored unicorns and the phrase, “Abortions are magical.”

Nothing says holidays like gaudy pro-abortion propaganda. Activists are constantly coming up with new phrases to put a positive spin on abortion. There were the billboards in Texas telling women abortion was a form of self-care. Rev. Katherine Ragsdale, the Episcopalian priest and new President and CEO of the National Abortion Federation, declared abortion is a blessing and that abortionists are “modern day saints.” NARAL and Planned Parenthood shout that abortion is a form of reproductive freedom and justice. Now in addition to those false ideas, abortion is suddenly ‘magical.’ I wonder if anyone’s told Santa?

I’m not just upset that abortion activists delude themselves into thinking an act that destroys life pairs well with a unicorn candle. What’s truly bothersome is the abortion industry and its allies use gimmicks, propaganda and manipulative language to sell abortion to the masses. Black, low-income women like my mother who walked out of her abortion appointment are targeted with abortion positivity madness. My mother was told by a “counselor” that abortion was the “best” decision for her to make. Today women are lulled to sleep with lies about self-care and ads for abortion spas.

I recall a friend sharing that an abortionist left fetal remains inside of her, causing her to seek urgent medical care. I sat in a Congressional office with a mother whose daughter died in her bed from negligence at an abortion facility. I know a woman who was tormented by suicidal thoughts after an abortion and another who was left infertile. Those experiences and others I’ve heard of are far from ‘magical.’

Abortion-positive language is wrongly used to normalize and “destigmatize” abortion. Misleading language that trivializes and romanticizes abortion is dangerous and woefully disconnected from reality. Statistics show the majority of women choose abortion because of financial concerns and other socio-economic reasons, revealing a lack of societal resources and support. Many see abortion as a necessary evil, not a celebratory act of empowerment.

READ: Post-abortive women are shouting their abortion regret and speaking for life

Every woman I’ve talked to who contemplated or chose abortion dealt with hard circumstances and some level of pain related to their decision. This pouring of glitter over an act that breaks apart the bodies of babies is in poor taste. Though these gifts are for volunteers, I wonder what would happen if I took them to the women exiting the abortion facility in the inner city near me. What if I handed them out as they left their appointments or as they went in? I’ve seen the despondency when women enter that place and the sorrow after they leave. Pro-abortion pep rally language proves to be disconnected from the reality of many women.

In a New York Times article about the way Americans view abortion as complicated, Frances Kissling, president of the Center for Health and Social Policy said, “To gloss over the complexity and morality of ending a pregnancy is to deny the reality that women experience. I think that if you do not express any moral doubt about any aspect of abortion nobody trusts you. You are so far from the sensibility of women who actually have abortions.”

Women do have varying emotions regarding abortion. Some feel relieved afterwards and others believe having an abortion was the right choice. Some will passionately fight for abortion access because of their experience. Their positive feelings don’t make abortion good, just as negative emotions are not what make the act wrong. For many, abortion is something portrayed an ‘acceptable’ way out that’s been offered by lovers, parents, professors and employers as a means to escape tough circumstances. This is why the work of pro-life pregnancy centers, women’s clinics, and resource organizations is so vital.

Abortion is not a gift from a fairy godmother or a ride on a magic carpet. It’s a violent act that leaves one human dead and another wounded. Too many people are making permanent decisions without adequate facts on the procedure, history of the abortionist/facility, knowledge of fetal development or understanding of potential emotional and physical consequences related to the act. Misleading phrases that drum up positive emotional responses in attempt to make this act palatable are not  helpful. Women need truthful facts about abortion and support, not pro-abortion fairytales.