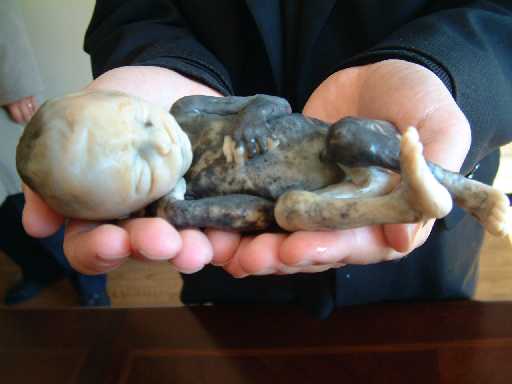 On April 2, a Live Action article quoted former abortionist Dr. David Brewer explaining how his conscience became hardened as he began performing first-trimester abortions. He would later go on to perform abortions in the second and third trimester.

Dr. Brewer started to preside over and perform second-trimester abortions by the saline abortion method. This method was the most common procedure used to abort  second- and third-trimester babies up through the mid-1990s. In a saline abortion, a caustic salty solution would be injected into the womb. The solution burned the baby’s skin and slowly poisoned the baby. It could take several hours for the baby to die. Labor was then induced, and the woman would “give birth” to a dead child. Because the doctors performed so many of these abortions, Dr. Brewer would refer to his workplace as “Abortion Manor.”

In his testimony, Dr. Brewer says that one of the reasons he became involved in performing these late-term abortions was that they were very profitable. In the late 1980s, a doctor got $500 for performing a second-trimester abortion. In his own words:

[We would] line the women up all in one big room and put the needles in and put the salt [saline] solution in, and then there would be five therapeutic miscarriages, right? Five times 500 is 2,500. That’s not bad fifteen years ago for one night’s extra work. You do that a couple of nights a week and that’s a lot of money.

So I would go to a room and a lady would be screaming and crying and walk in, and here was like the “candy apple babies” that you’ve seen all scarred and burned from the salt solution, and the placenta would be stuck and we’d have to work with them, and once in a while we’d have to take them to surgery and do a D&C. Boy, that was grim!

But one night, a lady delivered and I was called to come and see her because she was uncontrollable. I went in the room and she was going to pieces. She was having a nervous breakdown, screaming and thrashing. The nurses were upset because they couldn’t get any work done and all the other patients were upset because this lady was screaming and I walked in, and here was her little saline abortion baby. It had been born and it was kicking and moving for a little while before it finally died of those terrible burns. Because the salt solution gets into the lungs and burns the lungs too.

Babies born alive after saline abortions were usually allowed to die. (The Philadelphia Inquirer had an article about this in 1981.) In rare cases, the baby was whisked away by a nurse and treated, usually against the doctor’s objections, and sometimes these babies survived. For example, Gianna Jessen was the survivor of a saline abortion. She  has spoken out against abortion numerous times. She was left with cerebral palsy and other health problems as a result of the saline solution. You can read a speech she gave before Congress in 1996 here.

Brewer later assisted in a hysterotomy abortion. The hysterotomy abortion was done very rarely even in the 1980s and ’90s. It was usually performed because there was some kind of health problem that prevented the woman from going through labor. It was like a C-section, done by opening the womb through an incision and removing the baby. Dr. Brewer describes what happened when he assisted in one of these:

I remember another experience as a resident when I had an opportunity to help one of Abortion Manor’s partners on a hysterotomy. This lady was too far along for a suction D&C; we did not have prostaglandins in those days; we did not do D&Es [where the baby is dismembered in utero] very often in those days. So since she was in the second trimester and far enough along (four to five months), why she was going to have a hysterotomy. Well, that was kind of exciting to me, to see a Caesarian on a baby that young, so I helped on that surgery. I remember as we made the incision and got in and made the incision in the uterus, to see the baby move underneath the sack of membranes as the Caesarian incision was made before the doctor broke the water. The thought came to me, my God, that’s a person! Then he broke the water, and when he broke the water it was like I had a pain in my heart just like when I saw that first suction abortion. Then he delivered the baby and I couldn’t touch the baby. I wasn’t much of an assistant; I just stood there and the reality of what was going on was finally beginning to seep in to my calloused brain and heart. They simply took that little baby that was making little sounds and moving and kicking over and set it on the table in a cold stainless steel bowl. Every time I would look over while we were repairing the incision in the uterus and finishing the Caesarean, I would see that little person kicking and moving in that bowl. It kicked and moved less and less, of course, as time went on. I can remember going over and looking at that baby when we were done with surgery and the baby was still alive. You could see the chest moving as the heart beat and the baby would try and take a little breath, and it really hurt inside and it began to educate me as to what abortion really was.

Struggling with an uneasy conscience

Dr. Brewer explains how, despite his horror at witnessing the child struggle for life, and his growing doubts about abortion, he was able to rationalize what he was doing:

What do we do when something gets so close to us that it hurts? We either fight it or we put it away. Either we fight it or we run. If somebody jumps out at me, I’m either going to run or I’m going to fight. I wasn’t equipped to fight, and so I ran. The way we run is by putting up barriers. My barrier was, well, boy, that really hurt; that was a living baby; now this abortion thing, I’ve got to deal with that somehow; I’m going to just have to decide something for myself here. This is not good. So I made a startling decision. I decided that, for me, life began when a baby could survive outside the uterus, and if I was involved in something like that, that would be an abortion. That was a nice smokescreen, wasn’t it? That meant that when I did the suction abortions I wasn’t killing anything. That meant that when I helped out on a saline abortion, and they said, do you want to do one? Sure, I’d like to try and see how the needle works and see how it goes. I wasn’t doing an abortion. That meant that the hysterectomy that I helped on was not an abortion because the baby couldn’t have survived outside. After all, it sat in the dish and died. So, for me, life began after 28 weeks and I continued doing abortions.

Over time, however, seeing younger and younger babies being treated and surviving challenged his rationalizations.

Then I saw more babies being born earlier and, you know, with our neonatal intensive care units and all of our modern technology. Back in 1973, we couldn’t do a whole lot other than on an anecdotal basis with babies that were even 28 weeks. But as technology increased, suddenly they were having luck with babies that were 28 weeks old, and then 27 weeks, and then 26 weeks. So I began to drop my smokescreen and I said, well, abortion then is after 27 weeks. Well, no, it’s after 26 weeks. Well, maybe it’s 24 weeks. Then I got to thinking maybe it’s 20 weeks. All I was doing was avoiding the problem.

The next smokescreen was, well, it’s really a baby when it’s all formed, so after 12 weeks it’s a baby so the first trimester abortions aren’t really abortions, and I can handle that. So I lived like that for a while.

I have big feet; I wear a size 14 shoe. All these different shoes I was trying on seemed big enough in the beginning, you know, but they were getting small real fast and they weren’t fitting. The next thing I knew I kept dropping my smokescreen back to where life occurred earlier and earlier.

Dr. Brewer continued performing first-trimester abortions, later working in a military hospital. Then he met a young woman who introduced him to Christianity. This awakened his conscience further, and all of the negative experiences he had had began to coalesce into a growing realization that all abortion, regardless of when a pregnancy into place, was morally wrong. His career as an abortionist ended when a woman came in for an abortion and he found himself unable to perform the operation. He sent her home and never performed an abortion again.

Dr. Brewer story can be found here in its entirety. http://www.priestsforlife.org/testimonies/1119-testimony-of-david-brewer-md-former-abortion-provider