Notorious abortionist Leah Torres is at it again. After engaging in a debate online with the Dank Pro-Life Memes account, Torres began discussing the concept of when human life begins and what exactly abortion encompasses — and admitted that not wanting to be pregnant anymore counts as a “medical reason” for a woman to undergo an abortion.

At the beginning of the conversation, Torres seemed to acknowledge the humanity of the preborn, tweeting, “Human beings are pregnant with human beings.” But then, when asked to describe how she would describe what happens during an abortion, she responded, “Products of conception are removed from the uterine cavity.” She also tried to argue that being pro-life is meaningless, as everyone is pro-life. But then the notion of opposing abortion unless it’s medically necessary was broached, to which Torres had a surprising response. 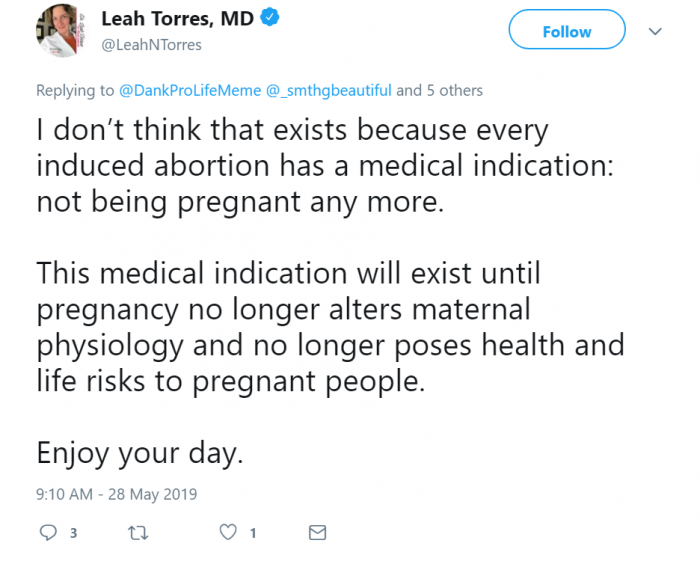 While abortion advocates frequently claim abortion should be legal simply because a woman should be allowed to choose for herself, more hysterical arguments tend to resort to the arguments of rape, disability, or the mother’s health. The problem with arguing that abortion must be legal in case a woman’s life is at risk is that abortion is actually never medically necessary.

READ: Abortionist likens miscarriage to abortion: ‘God performs more than I do’

In the case of a true medical emergency, doctors will deliver the baby right away, either through an induction or a c-section, which is faster and safer than an abortion at that late stage. A late-term abortion would take multiple days, as opposed to hours. And as former abortionist Dr. Anthony Levatino explains, abortion does not save women’s lives.

Yet as Torres’ tweet shows, the idea of “medically necessary” abortion usually boils down to any reason at all. And ultimately, this is what Roe v. Wade and Doe v. Bolton allow for.

As the text of Doe reads, “… We agree with the District Court, 319 F. Supp., at 1058, that the medical judgment may be exercised in the light of all factors – physical, emotional, psychological, familial, and the woman’s age – relevant to the wellbeing of the patient. All these factors may relate to health…..”

This vague language means women can have an abortion for any reason whatsoever, and it can be marked up to an issue of emotional health. And while Torres breezily waves off “not being pregnant anymore” as a medical reason for an abortion, the reality is that most Americans strongly oppose this kind of pro-abortion extremism.