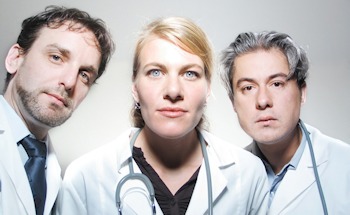 A Texas abortionist made several statements last Wednesday which demonstrated a total disregard for women’s health.  The remarks were made at a hearing over an Alabama law requiring that abortionists have hospital admitting privileges.

The bill is poised to shut down abortion mills in the state, because normally an abortionist’s residency near the hospital is required for the granting of hospital admitting privileges. At Montgomery County’s abortion mill, all of the abortionists travel in from out of state (a common practice in the abortion industry).

I’m not aware of any procedure in medicine where it is required by law that a physician performing it have admitting privileges.

Fine may be “unaware” of these procedures, but he certainly has no excuse for his ignorance. As Live Action’s Sarah Terzo chronicled,

Case closed; but not for Paul Fine. He went on to assert that abortion is “safer than getting a shot of penicillin.” Fine seems to be under the impression that saying things lends them de facto truth. In actual reality (not the reality in which Fine lives), abortion is not “safe,” as Life Dynamics’ Blackmun Wall testifies.

Furthermore, the assertion that abortion is safe because it’s safer than other things is a fallacy in itself. Even if abortion were safer than the host of medical procedures to which abortion proponents like to contrast it, this fact would not make abortion itself safe. And to say it would is the fallacy of false cause. Then again, abortion backers, who advocate legalized murder, aren’t known for their logic skills.

Fine also argued that Louisiana should not pass its pro-life bill because the risk of abortion-related complications and maternal deaths are, in his opinion, low:

The risk of death from abortion is about six per 1 million.

It is very important to emphasize that abortion reporting numbers in the United States are a farce. The CDC only gathers information from states that voluntarily submit reports, and those reports follow vague guidelines as determined by the individual states. In essence, it is up to states and abortion mills to determine what they report to the federal government. Therefore the CDC can only under-report on these numbers. The  only other reliable source for these stats comes from the Guttmacher Institute, which is an organization dedicated to abortion rights. It is in the Institute’s interest to portray abortion as a safe procedures; its bias cannot be trusted to publish comprehensive numbers on maternal death, either.

Even if Fine could substantiate his statistics (he cannot), the pro-life movement asserts that the lives and dignity of those 6 women per 1 million are worth protecting with pro-woman legislation.