In England, some abortions are done in private facilities, but others are done in public hospitals. In many hospitals, being an obstetric nurse means having to care for women who are having abortions as well as patients having miscarriages or other procedures. One British student nurse who became pregnant while working in a hospital that did abortions wrote about her experience.

Amy Quinn was a student nurse assigned to a gynecological ward that did abortions as part of her training. Shortly after arriving at her new workplace, Quinn was confronted with the reality of abortion. She saw the dead body of a baby who was aborted by prostaglandin. Prostaglandin abortions are seldom done in the United States but are common in some European countries. In this type of abortion, labor is induced and the woman delivers a dead (or dying) baby. This method is often very distressing for women, who may see their aborted children.

Prostaglandin abortion is … a more distressful experience for the woman. The procedure takes between twelve and thirty-six hours to complete. The woman endures the contractions and pains of labor, and delivers at the end of it, what she may perceive (if she actually sees it, which she may do) as a dead baby.

Kenny gives a possible reason why abortions are done by this method — research:

From a laboratory viewpoint, the delivery of a foetus intact is more useful than a dismembered foetus. Better research can be done on a foetus which is in one piece and if it happens to be abnormal, more can be learned from it when it is delivered whole.

Amy Quinn describes finding the body of the aborted baby on her first day of work:

While a third-year student nurse at a London teaching hospital, I was sent to work on a gynae ward. Entering the sluice on my first shift I was surprised, not to say horrified, to see a dead foetus of about 14 or 15 weeks’ gestation in a plastic bowl, and this set off the tone of my 13 weeks on the ward.

A baby at 14 weeks is fully formed. A living 14 week old preborn baby has a heart that has been beating for 10 weeks. He or she has a brain that is giving off waves. The baby responds to touch and will have a startle reaction when he or she is touched with something. The baby can have the hiccups. She is already right or left handed. She has lungs and “breathes” amniotic fluid to practice for breathing air when she is born. If she is a girl she has ovaries and a uterus of her own. He or she not only has hands and fingers, but also fingerprints.

Here are two ultrasound photos of babies at 14 and 15 weeks from The Endowment for Human Development. 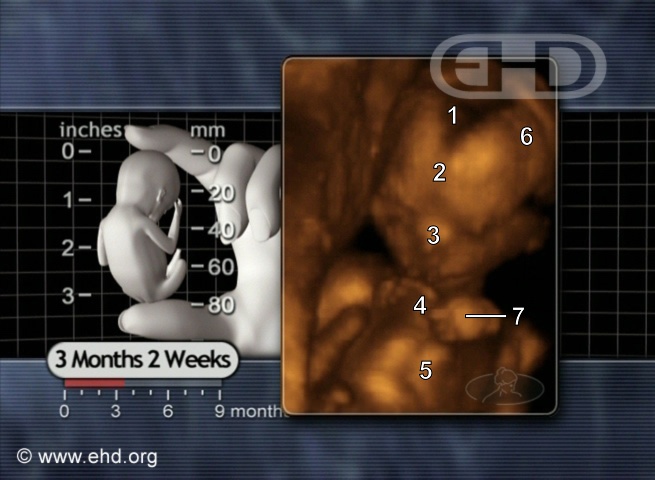 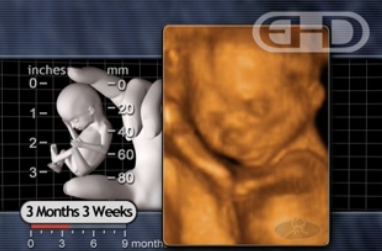 The staff were hearty but callow; whether they were attracted to the job because of these traits or they resulted from it, I just don’t know. It is unnecessary to expound on the cruelty of the juxtaposition of girls having “terminations” and those who have lost wanted babies or who are dying from diseases to their reproductive organs, which may have been useless to them, but it never ceased to be distasteful. Likewise, it was an unhappy experience to meet friendly, jolly girls of my own age, who put finishing a secretarial course or not ruining their social life above the lives of their expected children.

The dictionary definition of “callow” is “immature, juvenile, and inexperienced.” Quinn implies that the other workers did not acknowledge the fact that they were helping kill human beings. They seemed to take abortion lightly. Quinn says that women coming in for abortions, particularly young women, were not troubled by what they were doing. This illustrates the dehumanization of preborn children in the culture.

Quinn then talks about becoming pregnant herself:

Falling pregnant myself while unmarried and not having finished training, while working on the ward, was predictably somewhat embarrassing. The trained staff were inquisitive and aghast, and there were hints that an abortion would be the logical step to take. One houseman who was friendly and whose wife was pregnant suggested he help me get “fixed up” so that I could finish my training without interruption. Presumably his expected baby was a loved individual, and mine was simply a barely-differentiated lump of lifeless cells. My only supporter on the ward, indeed the only person who didn’t see me as positively weird, was a first-year student nurse who had been adopted – she said she was glad I wasn’t having an abortion, because if her mother had not taken the same course, she wouldn’t be here now. Judy is a good example of the waste of life with abortion.

Despite pressure to abort from those who disapproved of her decision to carry to term, Quinn had her baby and left the abortion ward.

Hell, even among abortion counselors who deal with the concrete evidence of [unplanned pregnancies] every day, who have good information and all kinds of contraceptive supplies at their fingertips, there are still no shortage of crossed-fingers pregnancy tests and hush-hush abortions. I’ve seen it happen. And I’ve only been working in this field a few months!

Abortion may seem to be the go-to solution for unplanned pregnancies among abortion workers, but some do carry their babies to term. Others choose to get pregnant while working in the facility. Unsurprisingly, abortion facility directors and owners are not supportive of pregnant employees.

Pro-abortion feminist Wendy Simonds interviewed workers at one abortion facility. One worker there spoke about a woman whose pregnancy was not accepted by other workers:

Audrey hasn’t been getting the support she needed after she got pregnant, and she felt like people didn’t want her to be pregnant by this guy because she was a lesbian before, and that she was totally confused, and just all that kind of stuff.

The abortion facility’s management was not supportive of employees’ pregnancies:

…Glenda, before she got her job as supervisor, apparently they asked her if she was planning to get pregnant or not, because she was going to have to take leave, and it was going to totally mess up the supervisors…It’s just like, please, if somebody wants to have a baby, then we need to be supportive and work around that, you know, but not let it interfere with their career tracks.

Even though the abortion facility advocated for “choice” they did not respect a woman’s choice to reject abortion and have a baby. Author Wendy Simonds says:

Though the center directors took pride in their acceptance of ‘choice’ as a central tenant of feminist health care practice, the Center had no policies that demonstrated support for employees who decided to procreate…when it became [an impediment to work] administrators disapproved. Women typically took two or three months of unpaid leave after their babies were born…some women complained that the managers were not willing to accommodate…their responsibilities to their children.

A basic indifference to children and motherhood was prevalent in the abortion facility Simonds wrote about. It is not surprising that an industry that thrives off the destruction of children would have indifference to mother and child’s welfare after birth.

Amy Quinn’s experience illustrates the dehumanization of preborn babies and a negative view of motherhood. It was only another student, who had a personal reason to be against abortion, who sympathized with Quinn’s choice to have the baby.

Quinn story and the other quotes give insight into the mentality of the abortion industry, an industry that the devalues fetal life and is not supportive of pregnant women who want to have their babies.