(National Review) A recent poll conducted by the Washington Post and ABC News is receiving positive coverage from pundits and supporters of legal abortion. The survey found that 60 percent of adults say abortion should be legal in “all” or “most” cases, the highest level of support for legal abortion since 1995.  According to the results, much of the reported gain took place because there was a significant increase in the percentage of respondents who said abortion should be legal “in all cases.” The poll also indicated an increase in the percentage of people who thought it should be “easier” for women to have access to abortion.

There is less to the substance of this survey than meets the eye. This is the first time since 2013 that a poll conducted by the Post and ABC News asked this specific question about abortion, so the results don’t actually reflect a short-term change in public opinion. More importantly, the poll seems to oversample left-leaning respondents: Its results show President Trump’s job approval at 44 percent, while recent polls by The Hill/Harris X and Rasmussen put Trump’s approval at 47 and 48 percent respectively. The Post/ABC poll also shows Trump receiving 43 percent of the popular vote against Joe Biden in a hypothetical 2020 matchup, while a recent Emerson poll showed Trump receiving 47 percent. These differences may seem slight, but even a slightly lower percentage supporting legal abortion would place the polling results well within historical averages.

Professional survey firms that conduct polls on abortion often limit their questions to that specific topic. This poll, meanwhile, asks about a range of political and policy issues and includes some questions about President Trump himself and his handling of immigration policy. A significant body of public-opinion research shows that answers to abortion-related questions can be affected by previous questions in the same survey. For instance, if questions about religion are asked prior to questions about abortion, respondents are more likely to say they are “pro-life.” Conversely, if questions about feminism or women’s rights are asked first, respondents are more likely to indicate support for legal abortion. As a result, it is possible that some voters primed to think about President Trump might be more likely to express sentiments in favor of abortion rights.

Interestingly, this new poll has received far more media coverage than last week’s Gallup poll, which showed a pro-life plurality for the first time since 2013. Of course, this is unsurprising. Many media outlets seem invested in pushing the narrative that the protective pro-life laws enacted by Alabama, Georgia, Missouri, and other states this year are in fact hurting the pro-life movement in the eyes of Americans. Those same outlets appear to have little interest in the counter-narrative, that legislation in blue states to make abortion laws more permissive – and growing Democratic opposition to the Hyde amendment – is reducing support for legal abortion.

Editor’s Note: This article was published by National Review and is reprinted here with permission.

It’s important to note that to reach the 60% abortion approval rate, Washington Post/ ABC News added together responses from “all cases” (27%) and “most cases” (33%). Also of interest is they felt no need to poll in 2016 after the Planned Parenthood body parts scandal was in the headlines. Last time polling took place was in 2013. 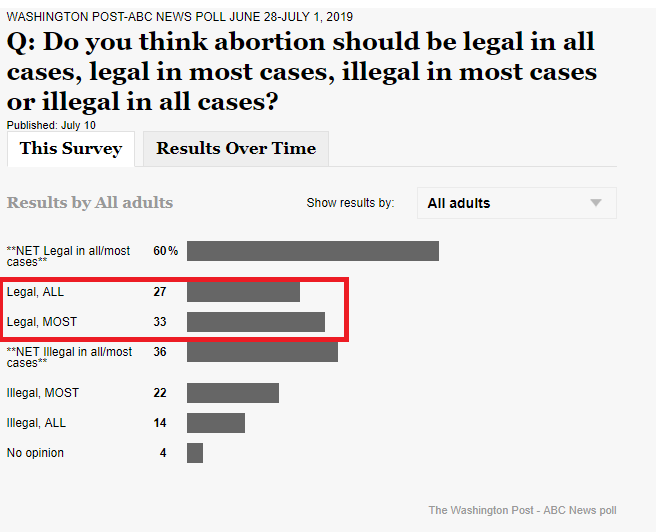 Most of those surveyed consider themselves Independent or Democrat. 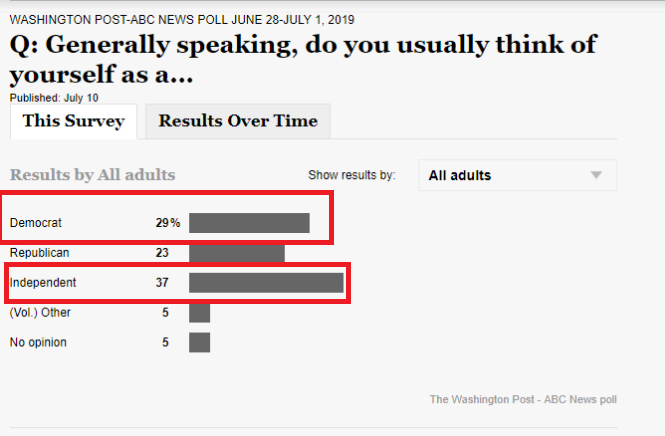