When you’re reduced to blatant logical fallacies to support late-term abortions, it’s time to call it a day. 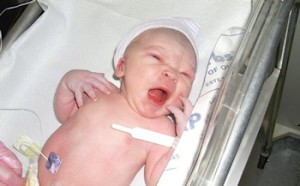 To the dismay of abortionists, Planned Parenthood employees, and pro-choicers everywhere, the national debate over abortion is hardly subsiding. In fact, the controversy over abortion is swelling to monumental heights and is continually coming into the political spotlight.

Recently, the abortion debate has erupted in our nation’s capitol – over a bill presented by a congressional subcommittee that would ban all abortions occurring after twenty weeks of pregnancy in the District of Colombia. At a hearing on Thursday, the bill’s sponsor, Rep. Trent Franks, referred to late-term abortions as “the greatest human rights atrocity in the United States today.”

According to the Washington Post, this bill is based on “the disputed claim that fetuses can feel pain at a gestational age of 20 weeks or older.” (Emphasis mine.) While supporters of the bill are using the argument of fetal pain to emphasize the brutality of late-term abortions, this callous statement implies that without definite proof of fetal pain, there is little reason for this bill to be passed. Never mind that the fetus is viable outside the womb during the last trimester. Never mind that tiny arms and legs are torn off a perfectly formed body by cold metal forceps. Never mind that the tiny head must be crushed before the body can be completely removed from the uterus. The fetus can’t feel pain yet.

With regards to selecting witnesses to testify for or against the bill, Franks affirmed that the typical protocol is to have one witness provided by the minority party and three witnesses provided by the majority. While House Republicans presented three doctors and medical experts who submitted strong evidence for the existence of fetal pain, the Democrats’ selection of a witness spoke of weak scientific evidence and desperation. Instead of providing credible experts to counter the Republican witnesses’ claims of fetal pain, Democrats chose a woman with no scientific background and a very unusual story.

Christy Zink, a George Washington University professor, was mother to an unborn baby boy who was missing half of his brain – until she aborted him at 22 weeks’ gestation. She testified against the abortion ban, claiming her son, if allowed to live, “would have experienced near constant pain.”

The problem with the House Democrats’ choice of a witness is simple – her child had an abnormality. Which means exactly that – her situation was abnormal. By using Zink as a witness against the bill, the Democrats perpetrated a logical fallacy. To be exact, they committed a hasty generalization fallacy, which “draws a general rule from a simple, perhaps atypical, case.”

By highlighting the case of a child with a rare and extreme disability, House Democrats sought to evoke compassion and sympathy for a mother who, when faced with a painful future for her son, desperately chose abortion. Despite the truth that every life is precious, forcing an anguished mother to give birth to a critically disabled child makes people much less comfortable than limiting a mother’s right to abort her baby in the third trimester because “it’s not the right time” or “we can’t afford another mouth to feed” or – the excuse that is frighteningly becoming more common –“it’s the wrong gender.”

Once again, we see the failure of the pro-choice movement to back up their claims with scientific evidence and their readiness to hide the weakness of their arguments behind logical fallacies and emotional appeals. But whether they admit it or not, science is on the side of life, and the truth will eventually penetrate the weak lies surrounding the pro-choice movement.