The comment comes from a 37-year-old woman who claims to be an “atheist/agnostic.” She says:

“quit with the lies and half truths. the set up of the pics are disgusting. seriously, would it be okay to play with and pose any other kinds of dead bodies? war is horrible but you don’t see people making horrific scenarios with peoples [sic] body parts.”

Of course, she does not mention what any of the “lies and half-truths” are, or offer to refute them. But the part that I found interesting was the part that said “would it be okay to play with and pose any other kinds of dead bodies?” 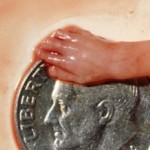 When she says “play with and pose” I believe she was referring to the pictures of aborted babies from the Center for Bio Ethical Reform. These pictures show pieces of aborted babies placed next to or on top of coins. This is done, I believe, to show the size of the aborted babies. Because the sizes are clearly displayed, the ages of the babies can be verified a little more easily. There are tables in embryology textbooks that show how big a developing embryo is at each stage of development.

What I find most revealing about this woman’s comment is the part that says “any other kind of dead bodies.” She freely admits that the pictures show “dead bodies.” Pro-choicers often identify unborn babies as “fetal tissue”or “fetal material.” Former clinic workers such as Abby Johnson have said that the most common way abortion providers refer to aborted babies is “products of conception.” What an evasive and sanitized term!

Yet this prochoicer freely acknowledges what I believe most people know deep down – that pictures of aborted babies are in fact pictures of dead bodies. The pictures show the dead bodies of children, not medical waste. Even more telling is the use of the term “people” to describe the aborted children.

Abortion is not the simple removal of “products of conception” Abortion kills people. And this abortion advocate knows it.

This website visitor’s comments are an example of what seems to be a growing trend among abortion advocates- admitting the humanity of unborn children but using arguments such as bodily autonomy to argue in favor of legally killing those children. I wrote an article some time ago quoting pro-choice activists, some of them very prominent, saying that abortion is equivalent to taking a life. Since I wrote that article, I have found other statements from pro-choicers to the same effect.

Pro-lifers are winning the battle to convince people that unborn babies are people. We must now turn towards the task of convincing people that killing these people is never justified.