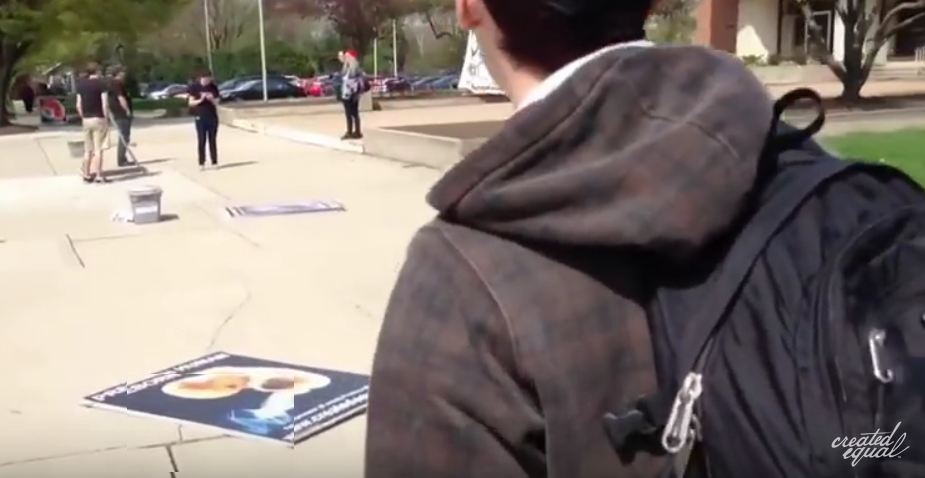 An exhibit at an Ohio campus, which shows images of abortion victims, has sparked such a controversy that some students are collaborating to censor the pro-life message by purchasing the sidewalk to shut down the protest completely. The pro-life group Created Equal which brings the truth of abortion to college campuses across the nation, said their exhibit of abortion victim images at the Campus Center location at Otterbein college was on public property owned by the city of Westerville. Seth Drayer, spokesperson for Created Equal tells Live Action News that the student government of the liberal college is set to purchase the public sidewalk to curb their First Amendment rights. This would have been unheard of years ago when the so-called Free Speech Movement on college campuses was born. In 1964, 60’s activists gathered on Sproul Plaza at the University of California Berkley to protest the school’s shutting down their political views.

Jo Freeman at the University of Illinois at Chicago describes that time in history this way:

“By the time Berkeley Chancellor Clark Kerr became University President in 1958, student groups could not operate on campus if they engaged in any kind of off-campus politics, whether electoral, protest or even oratorical. At the Berkeley campus students spoke, leafleted and tabled on the city sidewalk at the campus edge. When the campus border was moved a block away, this activity moved with it…”

Enter 2015, when politics are clearly permitted on campus, the only question is, whose politics and views will be allowed? In Ohio, the message is clear – no pro-life viewpoint will be tolerated on the campus of Otterbein University in Westerville. This was reinforced by the student newspaper, Otterbein360 which reported that the campus climate subcommittee discussed the purchase of the sidewalk at its Oct. 26 meeting after the Campus Center sidewalk was used twice this year by Created Equal to, “stage protests including images of aborted tissue on public property, where speech is currently regulated by a public instead of a private entity.”

Why the censorship of the pro-life group?

According to a member of the student government, Elise Woods, it makes students unhappy, telling the paper that “for the abortion protests, I just noticed that when those specific people, that group, is on campus, it makes the campus climate…people get very unhappy,”she said according to the newspaper,” she said.

But, Conner Dunn, vice president of student government, was slightly more reasonable – slightly being the operative word, telling the student body that, “Buying up the sidewalks is an alright idea. Unless we buy all of Otterbein’s sidewalks, it wouldn’t stop much, they would just go to a different part of campus.”

Mark Harrington, founder of Created Equal responded to the censorship plan by stating:

“The insane “Safe Space” coddling cultures of Mizzou and Yale are not anomalies. Created Equal has observed an entire generation of young people who are willing to take increasingly drastic measures to punish anyone with ideas they dislike! Recently, Otterbein University’s student government (through their “Student Experience and Campus Climate Committee,” whose purpose is to “address campus climate”) applied for a grant to buy the very ground we stand on to conduct peaceful outreach! This purchase would transfer sidewalk ownership from public to private, giving Otterbein the rights to kick us off of the sidewalk, because “[our display] makes the campus climate… very unhappy.” Seth Drayer said this is not the first time students tried to censor their pro-life message on this campus. In 2013, a student attempted to knock over signs showing pictures of the victims of abortion, the preborn child in the womb. In 2015, another Otterbein student recruited a “bed sheet brigade” to try to censor the images. Another stood in the street in front of Created Equal’s Truth Truck and JumboTV trailer to temporarily stop it from circling the campus.

“Students themselves, who throughout time have railed against “The Man” to fight for free speech, are trading in this American treasure for thirty pieces of silver—or, in the case of Otterbein, thirty feet of concrete.” Drayer said. “They do this under the guise of creating “safe spaces” free from reminders of emotional pain (i.e., “triggers”).”

Harrington told 10TV that even if Created Equal didn’t have the option of sidewalks, the group would still get its message out, “The more they try to censor us–bed sheets, knocking over signs, trying to purchase a public sidewalk–it’s not going to deter us,” he said. But, despite the desire to purchase the sidewalk and shut down Created Equal’s display, the city of Westerville told abortion supporters that the sidewalks were not for sale.

“Public sidewalks are public infrastructure and generally they don’t go up for sale the same way private property would or a house might go up for sale,” said Christa Dickey, community affairs administrator for the city of Westerville.

Created Equal said they will continue speaking the truth of abortion on college campuses. Meanwhile, Otterbein students in favor of censoring the pro-life message should reflect on the 1960’s Free Speech protests at Berkley and understand that speech should be protected not silenced.

The words of Lynn Hollander Savio, a senior at Berkeley in October of 1964, contradicts censorship attempts from Otterbein abortion supporters. Years after the Free-Speech Movement on campus was birthed, Hollander Savio reinforced the need to protect political speech on campus when she told told NPR, “ We gave youth in America a sense that political and social action is something that you can and should be involved in…” she said.