A recent report from the Arizona Department of Health Services revealed a 4.2% drop in the abortion rate from 2011-2012, and a 7.4% decline in the total number of abortions. Compared to national figures that show a basically flat abortion rate, this change in Arizona is encouraging. Pro-lifers have been hard at work in Arizona over the last few years seeking to enforce stronger legislation to protect women and children from the predatory abortion business.

According to the Arizona Department of Health Services (AZDHS):

During the 2012 reporting year the total number of reported elective abortions performed in Arizona was 13,340, compared to 14,401 in 2011. This represents a 7.4 percent decrease in overall abortions irrespective of resident status.

Arizona pro-lifers have proven their dedication to women first and foremost through the steady stream of legislation, ranging from strengthened informed consent laws to strongly restricting which medical professionals are authorized to perform surgical abortions. Notably, Arizona also streamlined and updated its abortion reporting requirements in 2010, implementing a secure, web-based reporting system in 2010. According to the AZDHS:

Beginning July 29, 2010, abortion data is reported using a secure, web-based reporting system. The new reporting system was designed to meet the requirements of the new law.

The following is a sampling of the laws that may have impacted Arizona’s significant decrease in abortions last year:

Dr. Randy O’Bannon, Director of Education and Research at National Right to Life in Washington, D.C., spoke to Live Action about these encouraging changes in Arizona. He said:

Laws have an impact, not just in depriving the abortion industry of controlling what women hear about abortion, but also in educating the public at large as to the humanity of the unborn child, about the real risks associated with abortion, and the availability of realistic alternatives to abortion.  I expect that all these factors played some part in this drop.

What it means, of course, is that the pro-life movement is wise to use every legal and legitimate means at its disposal in order that, “by all possible means, we might save some.” 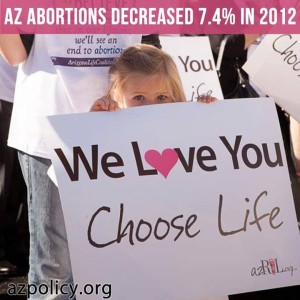 A key factor that may have played into the drop in the abortion rate in Arizona after the last couple of years is that seven Planned Parenthood abortion mills were forced to halt their abortion practices once some of the above long-delayed laws went into effect, making Planned Parenthood non-compliant with the law. According to the Center for Arizona Policy (CAP):

Several of those laws, some of which have been delayed for years by court battles, went into effect in late 2011 and resulted in Planned Parenthood of Arizona halting abortions at seven clinics.

According to CAP, more recently-passed legislation which has not yet gone into effect may help to continue to bring the abortion rate down in the years to come:

Parts of HB 2036, which was passed in 2012, will go into effect later this year which should cause the abortion rate to drop further.  Specifically, requiring doctors that perform surgical abortions to have admitting privileges at a hospital within 30 miles of the abortion clinic, and requiring medication abortions to be administered according to the FDA protocol.