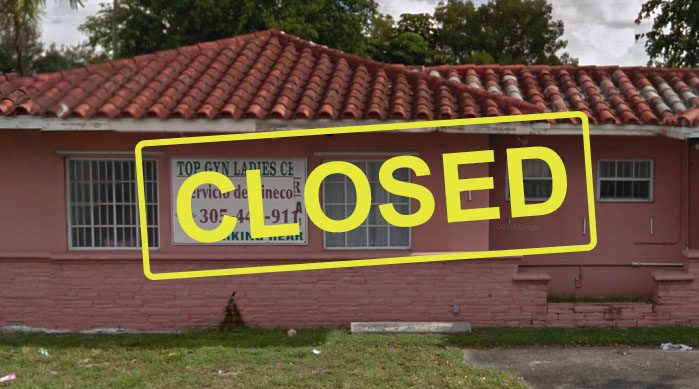 (Pregnancy Help News) At 1 p.m. this Halloween, “Top Gyn Ladies Center” near Little Havana in Miami made its last dollar from abortion.

An hour later, Martha Avila signed a lease on the building, paving the way for Heartbeat of Miami’s fourth location—including their second shuttered abortion facility in the past three years.

Just days later, with occupancy permits in hand, Avila and Jeanne Pernia—both part of the founding team in 2007—hung a banner with their pregnancy helpline number (888-981-7770) on the side of their new digs.

They are already receiving calls from women calling for abortions as a result of the sign hanging from the side of a building that, for so long, had stood as the neighborhood’s only choice in the midst of an unexpected pregnancy.

“We went in when they had already left for the day, and I must tell you, it was such a sad feeling to see the instruments there and to know what had gone on for so long in this building,” Avila said.

The Provision to Fuel the Vision

When Heartbeat of Miami first opened its doors, it was the first known pregnancy center in Miami-Dade County, compared to 37 abortion clinics. Since the organization arrived, however, they have watched three abortion clinics go out of business.

Four months ago, a Planned Parenthood directly across the street from Heartbeat’s North Miami location closed its doors after trying—and failing—to compete with the nonprofit since they established their second location there in 2008.

When the chance came to move into the former abortion facility this October, Avila made a call to John Ensor, now president of Passion Life Ministries who recruited Avila and Pernia to spear-head Heartbeat’s launch when he was on staff with Heartbeat International.

The two prayed together, asking God to give them clarity as to whether or not to pursue the opportunity. The budget was tight enough already—particularly since Heartbeat of Miami serves in areas of financial need—but Avila knew if God was leading them to move into the former abortion facility, He would provide a way for it to happen.

Leading up to their annual banquet Oct. 22, Avila told keynote speaker Sol Pitchon—president of New Life Solutions in Tampa Bay—about the opportunity. If he felt led by the Lord to mention the situation in his talk, she encouraged him to do so.

By the end of the night, a young businessman in the crowd volunteered to cover the rent, at $2,000 per month, for the first year.

“Talk about being led by the Holy Spirit, that was definitely what we needed to do,” Avila said.

While Heartbeat’s move into their second shuttered abortion clinic makes them the first known pregnancy center to take over two ex-abortion businesses, a growing list of pro-life pregnancy help organizations have taken over closed abortion facilities.

Earlier in November, Hope Pregnancy Centers of Brazos Valley (TX) moved into a former flagship of Planned Parenthood in Bryan, Texas. Similarly, the building at 72 Ransom Ave. in Grand Rapids, Mich., that once housed an abortion facility is now home to LIFE International. The National Memorial for the Unborn in Chattanooga, Tenn., is also a converted abortion facility.

Set to open its doors in December, the new clinic follows just a matter of months on the heels of Heartbeat’s third location, which opened in September. After a long road dealing with the red tape involved in opening the third location, a new outpost wasn’t in the immediate plans of Avila and the rest of her staff and board.

Even though the new location was, to borrow a word, “unplanned” in the minds of Heartbeat, they are welcoming the opportunity to serve women in the same building where so many lives have been lost over the past 20-plus years.

Within two miles of historic Miami Senior High School and the InterAmerican campus of Miami Dade College—and the 5,400 high school and college students those two campuses represent—the new location is a perfect fit for Heartbeat.

“We always wanted Little Havana, because that is a very needy area,” Avila, who attended Miami Senior High School just two miles down the road, said. “And the Lord gives us this new building just a few blocks away from Little Havana. There is nothing in that area, only abortion businesses.”

Avila, the founding president, has served alongside Pernia, the client services director, since the organization’s inception in 2007. Heartbeat’s first location was established in Hialeah, across the parking lot from an abortion clinic Pernia’s mother had owned and operated in the 1980s—and where she herself had undergone an abortion.

When that abortion business closed its doors in 2013, Heartbeat relocated its initial life-saving outpost to the very facility Pernia’s mother had owned. In the meantime, it had established the North Miami location, followed by its third site earlier this year.

Eight years into their journey—and 19,000 children rescued from abortion later—Avila and Pernia are just weeks away from opening the Little Havana location.

“Just when we thought that we heard everything, with Jeanne’s story, then God just blows us away with this,” Avila said. “I give God all the glory.”

Editor’s Note: This article originally appeared at Pregnancy Help News, and is reprinted here with permission.