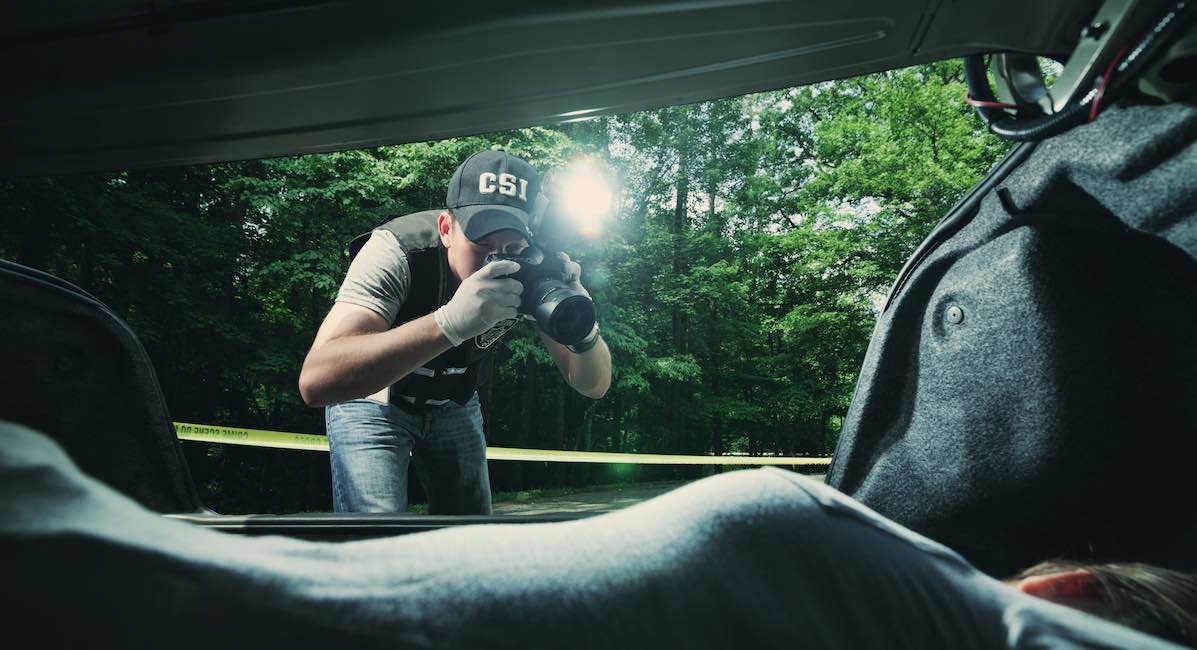 Legal abortion does not equal safe abortion – but unfortunately, too many are willing to perpetuate the myth of “safe” abortion, allowing the abortion industry to remain largely unaccountable while women die. Thankfully, in the case mentioned below, some semblance of justice was served after an attempted cover-up.

In 1993, 20 years after the infamous 1973 Roe v. Wade Supreme Court decision legalized abortion nationwide in the U.S., abortion facility owner Alicia Ruiz Hanna was witnessed stuffing a 27-year-old abortion client’s dead body into the trunk of a car at her California abortion business. According to the Orange County Register, Hanna had dreams of building a “blockbuster” abortion business in the Hispanic community. That dream ended after she killed the woman who came to her expecting a “safe and legal” abortion. (Source: Orange County Register: Clinic owner thought big, ex-associate says, January 27, 1993)

According to the Associated Press (AP), 27-year-old Angela Nieto Sanchez entered Hanna’s Clinica Femenina de la Comunidad abortion business in Santa Ana, California, with two of her four born children: 12-year-old daughter Maria and 3-year-old son Martin. Sanchez was one month pregnant and was unaware of the lack of care she was about to receive. She had no way of knowing that the abortionist she paid was masquerading as a “doctor” in an effort to increase her profits.

“Hanna took her to a treatment room, gave her Valium and injected her with a still-unknown drug, trying to induce a miscarriage. Instead, she suffered a seizure and died,” the AP reported. Hanna never summoned help for Sanchez. To cover up Sanchez’s death, Hanna ordered her assistant Irasema Mendoza to tell Sanchez’s children that their mother had gone home without them.

A short time later, assistant Mendoza offered to take the children to lunch. When they returned, Sanchez’s car was gone. The children were told that their mother had left to go to another facility. Twelve-year-old Maria then called a relative to come and pick her and her brother up. 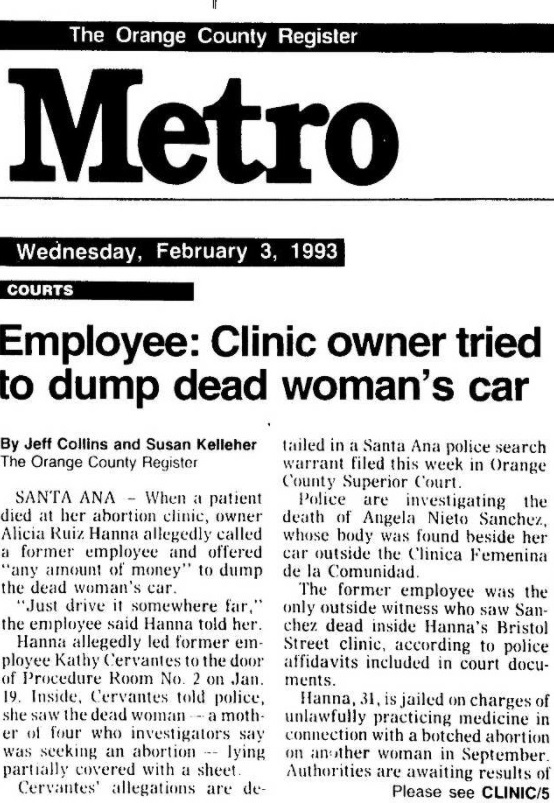 According to the LA Times, at the murder trial, Mendoza testified that she was cleaning the office when the abortion facility owner began yelling that “a patient was dying on her.”

What happened next was truly shocking. The AP reported:

Later that evening, Sanchez’s 12-year-old daughter Maria returned with relatives. She spotted Hanna trying to stuff her mother’s body into a car trunk, the child told authorities. A former co-worker testified Hanna planned to dump the body in Tijuana, Mexico.

According to the Los Angeles Times, former receptionist Kathy Marie Cervantes testified that Hanna sounded “scared” when asked her for help in getting rid of Sanchez’s car. Cervantes told the jury she was stunned to find Sanchez dead in one of the examination rooms, her body covered with a sheet. She testified that Hanna “said she would give me all the money I want just for me to get rid of the car. Somebody from New York was going to come and take care of the body.” Cervantes said she had refused to help.

When Sanchez did not return home later that evening, her sister and eldest daughter returned to the abortion facility and were shocked to discover that Sanchez was dead. According to the LA Times, Angela’s daughter Maria testified that she began crying and tried to hug her mother’s body, which was snatched away by Hanna. “I was running toward my mother’s car, and I saw them dragging something from the clinic,” Maria, then 14 years old, testified. “I asked where my mother was. (The assistant) said she didn’t know. Then I saw it was my mother. I saw her drop my mother’s legs.”

Later, Maria said she managed to embrace her dead mother.

On January 22, 1993, the 20th anniversary of Roe v. Wade, the Orange County Register reported that Hanna had been arrested.

Hanna was initially arraigned on charges of improperly practicing medicine without a license, including performing a botched abortion. However, a jury ended up convicting Hanna of second-degree murder, and she was sentenced to 16 years in prison.

According to the LA Times, abortionists Anthony Cappelli and Nicholas Braemer — who had worked for Hanna — testified at her murder trial. The two doctors had remained silent prior to Sanchez’s death, despite knowing that Hanna had been committing abortions and routinely giving patients injections and anesthesia in preparation for abortions.

According to California Health Daily, prosecutors maintained that Sanchez “could have been saved because a fire station staffed with emergency workers was less than one mile away.” Instead, Hanna refused to call 911 because she “feared being arrested for performing illegal abortions,” an act which the trial judge called “callous and self-serving.”

While killing millions of developing children in the womb, the abortion industry presents itself as a defender of women’s rights. Incident after incident has revealed this to be anything but true. Even today, the industry fights against every form of oversight meant to protect women and young girls.