Not long after a Live Action News report on the closings of two Ohio abortion facilities, the Akron Women’s Medical Group and the Cleveland Women’s Medical Group, comes the news that the Ohio Medical Board has suspended the license of abortionist David Burkons, who operates the Northeast Ohio Women’s Center in Cuyahoga Falls, for failing to record prescriptions involving opioids and benzodiazepine drugs.

At the time this article was written, the website for the state’s medical board showed the abortion doctor’s license as “active”; however, the Columbus Dispatch reported news of the suspension: 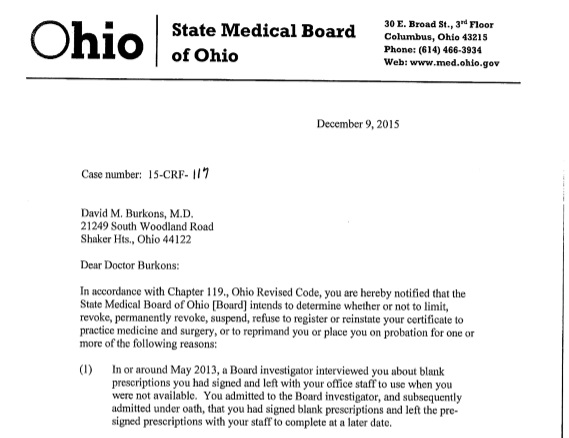 …[T]he state Medical Board of Ohio on Wednesday suspended for six months the medical license of Dr. David Burkons, who owns an abortion clinic in a suburb of Akron, for signing blank prescriptions and leaving them with employees to fill out and for failing to record prescriptions in patient files.

The offenses were unrelated to Burkons’ work at the Northeast Ohio Women’s Clinic in Cuyahoga Falls, and it was unclear how his suspension would affect the facility, which the doctor opened in 2014.

The actions that led to Burkons’ suspension date to 2011. Medical-board records do not reveal where the doctor was working at the time, and he did not return a message seeking comment.

According to the 2015 complaint, Burkons was accused, in part, of failing to record certain prescribed controlled substances into patient records, some being opioid medications such as Vicodin, Hydrocodone, and Percocet, which are highly addictive.

According to the Centers for Disease Control (CDC), nearly half of all U.S. opioid overdose deaths involve a prescription, and in 2015, more than 15,000 people died from overdoses involving prescription opioids.

In addition, the FDA has conducted and reviewed several studies showing that “serious risks are associated with the combined use of opioids and benzodiazepines” — drugs the Ohio abortionist also failed to record in patients’ charts, such as:

Burkons tried to downplay the suspension, telling Cleveland.com that his license suspension was “due to a few minor paperwork violations, none of which resulted in his prescriptions being used for ‘pill mills’.” And the media appears to be willing to make light of the accusations as well. 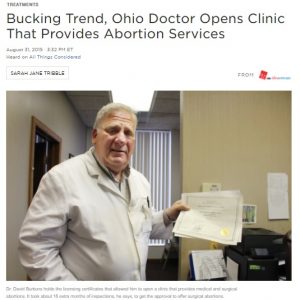 The same year the state was looking into the prescription drug case involving Burkons, he was signing his name to a letter requesting that Attorney General Loretta E. Lynch investigate the Center for Medical Progress (CMP).

The letter claimed that CMP “intended to vilify Planned Parenthood, and, by proxy, all abortion providers,” as part of “an unprecedented and multi-pronged assault against women’s reproductive rights….”

In 2015, Burkons was also painted as a hero by the media in an attempt to disparage abortion laws in the state of Ohio.

A report published by NPR that same year promoted the Ohio abortionist by making it sound as if the state’s licensing requirements on his abortion facility were too restrictive. The report read in part:

Burkons wanted the clinic to be personable, with minimal wait times.

Initially in his new clinic, he could only administer the pills that induce medical abortion. But this summer, after 18 months of state inspections, rejections and — finally — acceptance, he began performing surgical abortions as well…. Ohio’s laws are examples of how seemingly narrow rules can significantly curtail abortion.

According to Ohio Right to Life executive director Devin Scribner, Burkons performed abortions in other facilities besides his own.

Live Action News has previously reported on Burkons’ employment at the Capital Care Network, replacing (according to Operation Rescue) abortionist Thomas Michaelis, who was convicted of attempted gross sexual imposition, voyeurism, and public indecency in 1991.

From 2011-2012, during [Burkons’] time working as an abortionist for Planned Parenthood, seventeen of Burkons’ patients experienced moderate to severe complications from their abortions. His performance was so dismal, state records show that 41% of all medication abortion complications came from his office during those years. 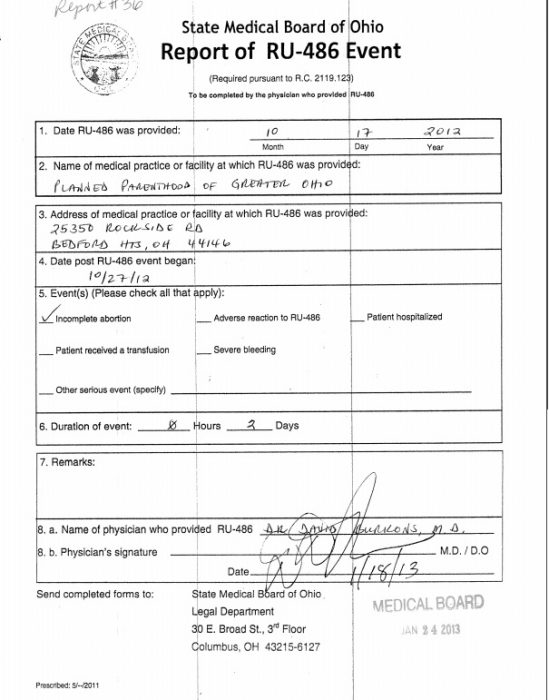 In 2013, Townhall reviewed reports obtained by Ohio Right to Life, which detailed Burkons’ treatment of patients using the abortion pill RU-486 at Planned Parenthood clinics in Ohio. OH RTL summarized a few of the cases this way:

Report #3: Dr. David Burkons of the Planned Parenthood of Northeast Ohio reports his patient was hospitalized, suffered “severe bleeding” and had to receive a transfusion.

Burkons has also been affiliated with the Planned Parenthood Bedford facility, which was recently fined $25,000 by the Ohio Department of Health for multiple violations….

LifeSite added how Burkons was “infamous for being the ‘medical’ director at Preterm abortion facility in Cleveland, where 22 year-old Lakisha Wilson died on March 21, 2014, during an illegal late term abortion.”