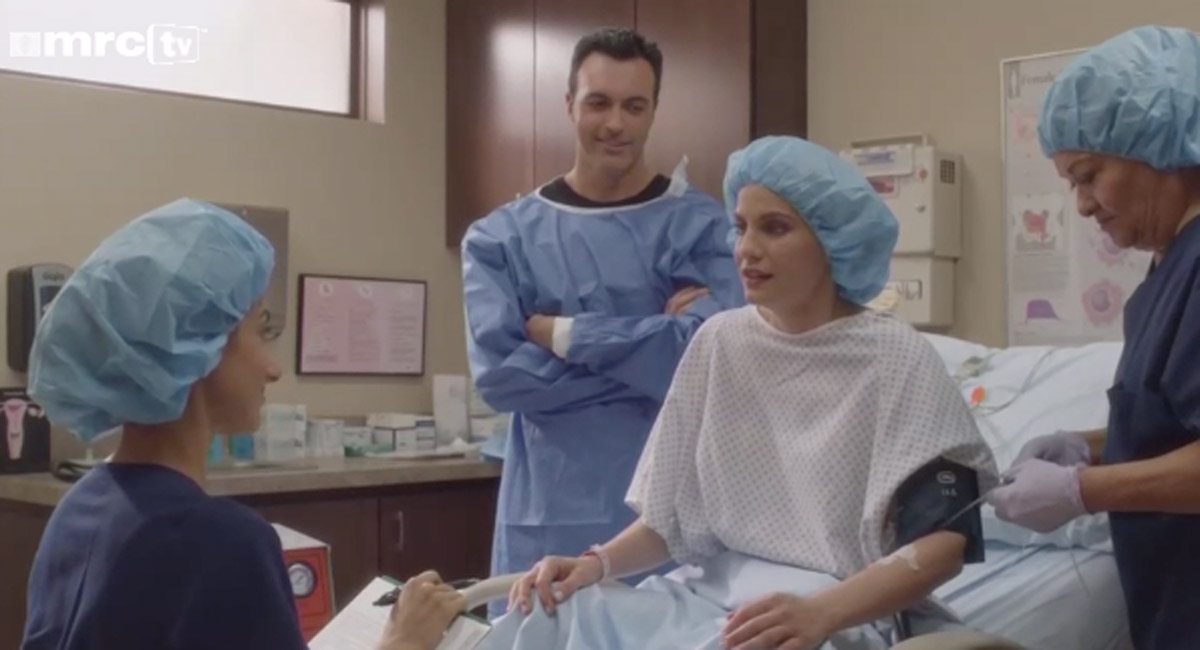 “Veep” is a political satire show that airs on HBO, starring Julia Louis-Dreyfus as the vice president of the United States. Also starring in the show is Anna Chlumsky, of “My Girl” fame, as Amy Brookheimer, the vice president’s chief of staff. In a recent episode, Chlumsky’s character gets pregnant and has an abortion, in a profanity-laden screed that fails to show the procedure as the empowering moment the writers seemed to think it would be.

Previously, Brookheimer realizes she is pregnant while on the campaign trail. The father, a fellow staffer named Dan Egan, convinces Brookheimer to have an abortion after she originally considered having the baby. The day of the abortion, Brookheimer further believes she has made the right decision when her sister gets drunk and sleeps with Dan, ending up too hungover to take her to the abortion facility. When pro-life protesters meet her outside the facility, Brookheimer loses it, screaming vulgarities at them like “hog-fingering f****” and “hypocritical c****.”

Then, when the abortionist takes the two of them into the room to commit the abortion, Brookheimer rushes through the informed consent discussion, saying, “Less talk, more abortion.” But then, as she signs the consent form, she shows a glimmer of doubt, saying, “I am as sure… as I will be.” As Brookheimer receives anesthesia to help her “relax,” Egan signifies that he’s no stranger to accompanying women to abortion facilities. “Is that the Berkeley VC-10? That’s like the Shelby Cobra GT of vag-vacs,” he says, adding, “Yeah, I’m the proud father-to-not-be.” Previously in the episode, he also said he would “go Dutch” with her on the cost of the abortion and send her money on Venmo.

At the end of the episode, Brookheimer wonders if she has made a mistake, but then gets a job offer from another political campaign, and responds, “You are in luck, because my schedule just got scraped clean.”

Chlumsky helped write the dialogue for the episode, and claimed that she and the writers wanted it to be realistic. “You want to say everything and you want to really get to the heart of stuff, but at the same time you don’t want this to be the writers saying something,” she said in an interview with the Daily Beast. She also claimed that her vulgar outburst is something that “just scratches the surface of what possibly — I don’t want to speak for every single woman — most women in that predicament feel.”

In another interview with the Hollywood Reporter, Chlumsky said the episode showed that her character had finally learned to “listen to herself.” And she had an even more disturbing take on what it meant.

“To Amy, the odds work out if this guy that she’s actually in love with could change. And when she makes the phone call [to schedule the abortion], I think she realized Dan’s not changing. That he’s a sex addict, not the guy she needs him to be and definitely not the guy that a child would need him to be,” Chlumsky said to the Hollywood Reporter. “It’s a motherly moment for her to realize that, and there’s this beautiful acceptance of finally seeing Dan for who he is. And there’s almost an instantaneous acceptance that there are other alternatives for life that might be better.”

Having an abortion is as far from a “motherly moment” as a person can get, and far from showing that abortion was empowering for her, it was portrayed as something sad, desperate, and decidedly not funny. It could be argued that abortion on screen could be handled sensitively and with nuance, but that is not what “Veep” did. And if this is how abortion advocates think they can work towards a more pro-abortion culture, it seems likely they will fail miserably.