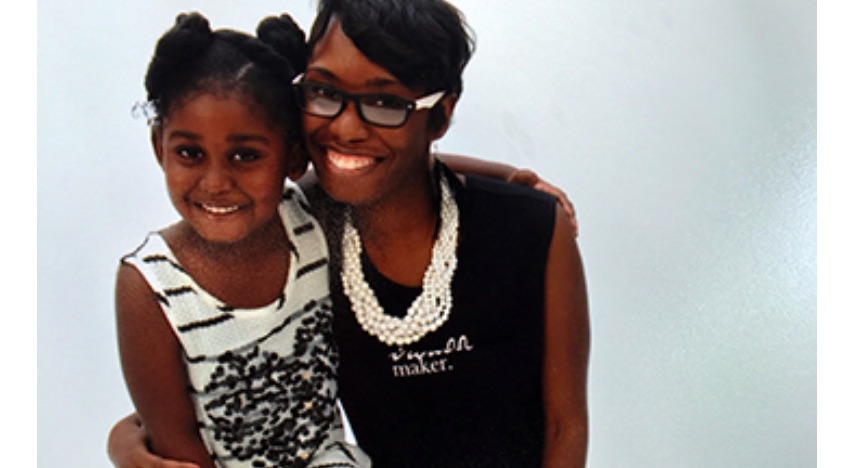 (Pregnancy Help News) — Having a baby changes everything—physically, mentally, emotionally and financially. Even though having a baby is challenging, it has its rewards too.

After you’ve had a rough day at work, for example, and you come home or pick your child up from school, their excitement at seeing you is the best feeling in the world. Or, when you child is ill and under the weather, all they really want is to be near you as a parent and have you nurse them back to health.

As a parent, it’s a pleasure to watch your child learn to put into practice an everyday activity you’ve taught them that will be useful to them the rest of their lives.

I’m enjoying every bit of this roller-coaster ride with my 4-year-old daughter. But, our journey together hasn’t always been gumdrops above the chimney tops. I’m taking the good with the bad, and I have Elizabeth’s New Life Center to thank for that.

I’ve come a long way—far from the verbally abusive relationship with my daughter’s father, far from the dependence on government assistance to take care of my child and myself.

It all began when I found out I was pregnant. I was terrified and didn’t know where to turn or what to do next. Both of us come from strict families with strong moral and religious beliefs, so we were both afraid of what they would say once it came out that we were pregnant.

So, we Googled places nearby to make sure that the home pregnancy test was correct. That’s when we found Elizabeth’s New Life Center in Dayton, Ohio. We scheduled an appointment where they verified that we were indeed pregnant. We received an ultrasound and heard her heartbeat—it was so strong and fast-paced.

I couldn’t believe I had a little person living in my body I was suddenly responsible to care for. I started to cry, knowing that as a mother at the age of 22, I would not have to explain this to my own mother.

I was in college full-time, working part-time. Things were going great until this happened. What would my mom think of me? What about the rest of the family? I knew I’d brought shame upon my mother and myself.

With all these thoughts running through my head, the only thing I could think of was to keep it a secret and see about an abortion. I Googled abortion clinics and found the clinic in Kettering, Ohio. We drove to the clinic together. As I spoke to the receptionist, she told me what to expect, including the fact I’d have to pay a $200 down payment, with the remainder due the day of the procedure.

After my boyfriend and I paid the down payment for the abortion, I had one more question for the receptionist: “What do you do with the babies after the procedure?”

“We throw the fetus in the trash,” came the reply.

In that moment, I remember thinking how inhumane that sounded. Whether or not I felt ready to raise a child, I knew my baby was not going in the trash. Even the thought made me sick to my stomach.

Our appointment was scheduled for a week later. Even though I did my best to hide my pregnancy from my mother, she knew something was wrong. A mother always knows her child. When I told her I was pregnant and that I had already scheduled an abortion, she said, “You cannot abort my grandchild!”

On the day of the procedure, I felt sick to my stomach, my knees were buckling and I could barely stand. I called the facility to see if I could cancel the appointment and get my down payment back, but the receptionist told me I couldn’t.

I had had a change of heart. Something had come over me. Plus, I wanted my money back to help take care of my baby—the baby I was going to now raise.

Almost immediately, I began searching for baby names and dreaming of the sex of my baby. When we found out we were having a daughter, I was excited and nervous at the same time—because I know girls can tend to be a bit much at times—but I was ready for all the loops I would endure with her.

Now that I had experienced this change of heart, I remembered Elizabeth’s New Life Center offered parenting classes to help me prepare for my baby’s arrival. I called and spoke with Meg at the center and signed up for classes right away. I went every week, whether my boyfriend came or not.

Nothing was going to keep me from providing from my child—not her father or anyone else. As my body started to change, I was excited to read up on the different weeks and stages of her gestational growth. I never missed a prenatal vitamin or a doctor’s visit. I was so proud to be a mom.

The staff at Elizabeth’s New Life Center and myself grew close. They called to check in on me and steered me to programs in our community that would benefit us. I received clothes, baby formula, socks, wipes, a car seat with a matching stroller, pacifiers, baby powder, baby shampoo, wash clothes and more.

On the day I gave birth, I called the nurse on duty at Elizabeth’s New Life Center almost 30 times. I had started labor and I was scared. The nurse helped to walk me through the early stages of labor, and never once grew impatient or irritated with me—even though I kept calling back.

When I went to the hospital later that day, to give birth to my daughter, Meg came to the hospital to meet my daughter. She brought along an Easter Bunny onesie with a matching hat and a card, and asked me if there was anything she could help me with.

Once my baby came, the relationship between her father and I broke down quickly. He became verbally abusive and had fits of anger where he would break things in our house that my friends and family had given us.

It has been hard to accept that I would need to raise my daughter as a single parent, but the support I’ve received from Elizabeth’s New Life Center has helped so much. I don’t know where I would be if I didn’t have them in my life.

Editor’s Note: Magalia Frazier shared her story before her elected congressional representatives in Washington, D.C., as part of Heartbeat International’s annual Babies Go to Congress, which takes place annually prior to the March for Life. Her story was first published here and at Pregnancy Help News on January 9, 2017, and is reprinted here with permission.