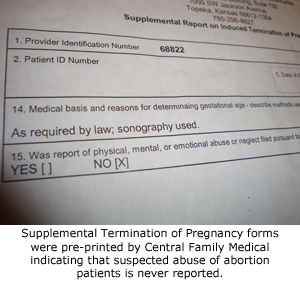 Operation Rescue reported on Thursday that a confidential informant provided them with documents showing that a Kansas City abortion clinic routinely failed to report suspected abuse of women and minors. The press release, found on Operation Rescue’s website and also on Christian Newswire, details a previous investigation by former Kansas Attorney General Phill Kline. Kline started an investigation in 2003 into Central Family Medical (CFM), also known as Aid for Women. The investigation was centered on claims that abortion clinics failed to report child sexual abuse. Kline’s investigation was derailed by the administration of former Governor Kathleen Sebelius, who now serves as U.S. secretary of health and human services. An ethics charge was later brought against Kline for his handling of abortion records.

Troy Newman, president of Operation Rescue and Pro-Life Nation, commented, “The State of Kansas owes former Attorney General Phill Kline a huge apology. It turns out his investigations of abortion clinics for not reporting child sex abuse was completely justified, according to documents we now have in our possession.” On Tuesday, Operation Rescue released redacted images of forms from the Central Family Medical Center. According to the pro-life group, the Supplemental Termination of Pregnancy forms are pre-printed with the answer “No” when the form asks if a report of suspected abuse was filed.

A letter to current Kansas Attorney General Derek Schmidt asks for Kline’s investigation to be reopened. In the letter, Troy Newman writes, “Included in the documents is private patient information about 86 women, including 4 minors, who sought abortion services during the single month of April, 2012. Perhaps more disturbing than the gross violation of patient privacy by CFM by leaving such information where it could be accessed by the public, is a series of Supplemental Termination of Pregnancy reports that indicate that CFM is using pre-printed forms indicating no reports of suspected abuse have ever been filed by them. These forms are evidence that CFM is intentionally ignoring suspected incidents of abuse and are refusing to report any suspected case to the proper authorities.”

Newman requests that Kline’s case be reopened and requests that Schmidt “fully investigate this matter and take whatever action is necessary to protect the public, including criminal charges and closure of the abortion clinic.” You can read the full letter to Kansas Attorney General Derek Schmidt here.

In Thursday’s press release, Newman writes, “If Kline’s investigation had been allowed to continue, we might see better protections for young women and girls who suffer form sex abuse. Instead we have abortion clinics that ignore abuse and refuse to report suspected cases. This situation is intolerable and must be investigated by authorities. Rape victims deserve better than to be given abortions then handed back to their abusers.”

You can find out more about Operation Rescue, including this case, here.