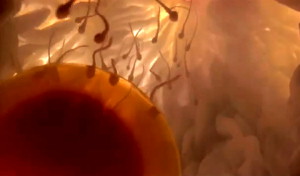 Robin Marty at the pro-abortion blog RH Reality Check attacked pro-life advocates for refusing to accept the definition of pregnancy given by the “medical field.” She complained that “anti-choice activists” are fighting a “war against contraception.” (Presumably, this is part of the war against women.) But she conveniently failed to mention the reason pro-life advocates oppose allowing the “medical field” to provide this definition. So, I’ll explain.

In 1965, the medical definition for when pregnancy begins was changed by the American College of Obstetricians and Gynecologists (ACOG). Why? Ideology.

At the 1959 Planned Parenthood/Population Council symposium, Dr. Bent Boving argued for changing the definition by moving the date of conception from when fertilization occurs to when implantation occurs. He said that “the social advantage of [birth control] being considered to prevent conception rather than to destroy an established pregnancy could depend upon something so simple as a prudent habit of speech.”1

In 1964, Dr. Christopher Tietze pushed this propaganda further. After noting that many religious and legal experts accept medical consensus as fact, he said that “if a medical consensus develops and is maintained that pregnancy, and therefore life, begins at implantation, eventually our brethren from the other faculties will listen.”2 Tietze would later win the Planned Parenthood Federation of America Margaret Sanger Award for outstanding contributions to the pro-abortion movement.

The concern then was both with public opinion, which opposed killing innocent human life, and many state laws, which prohibited substances or devices that caused abortion. Because while birth control pills work primarily by preventing conception, they also have a secondary effect of preventing an already conceived human life from implanting in the uterus. Abortion industry leader Planned Parenthood’s own website states this about the pill:

“The hormones also thin the lining of the uterus. In theory, this could prevent pregnancy by keeping a fertilized egg from attaching to the uterus.”

While the statement is somewhat dismissive of the potential effect, what Planned Parenthood acknowledges is clear. Early destruction of human life post-fertilization is possible with the pill.

So, to avoid having the pill labeled a potential abortion drug, a “new” definition of conception was needed to overcome these obstacles. And the ACOG obliged. Without a shred of scientific evidence to justify the change, the ACOG redefined conception as “the implantation of a fertilized ovum [egg].”3 Mission accomplished.

Science proves that life begins at conception, at fertilization, when sperm and egg unite, forming a zygote.4 In the medical field, however, pro-abortion proponents object solely on the grounds that a pregnancy is usually undetectable until implantation, which occurs approximately six days after fertilization. But what is being implanted? A fertilized egg, they admit. And what is a fertilized egg? A human life, they admit. So, pro-abortion proponents claim pregnancy doesn’t begin until implantation, but admit that a “non-pregnant” woman has, in fact, been carrying a human life for approximately six days. Sound logic.

To this day, the irrefutable fact that birth control pills can actually cause early abortion has been intentionally withheld from most women.