“The weak [are] broken and torn for the profit and convenience of the strong!” 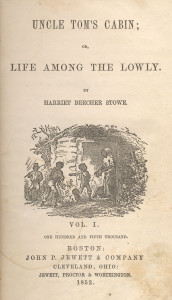 I am reading through Harriet Beecher Stowe’s famous novel, Uncle Tom’s Cabin, and tonight I was struck by how closely the cultural debate concerning slavery, preserved in this novel, mirrors the modern abortion debate in America. Consider the following exchange from Chapter 12. Several white passengers are traveling on a riverboat which happens to also be transporting slaves in chains:

Passenger 1: “What a shame to our country that such sights are to be seen!”

Passenger 2: “O, there’s a great deal to be said on both sides of the subject.  I’ve been south, and I must say I think the Negroes are better off than they would be to be free.”

Passenger 1: “In some respects, some of them are well off, I grant.  The most dreadful part of slavery, to my mind, is its outrages on the feelings and affections, – the separation of families, for example.”

Passenger 2: “That is a bad thing, certainly.  But then, I fancy, it don’t occur often.”

Consider the two arguments for slavery contained in this exchange:

Have you ever encountered the echoes of these arguments in your own conversations about abortion?

How should we respond to these arguments? Well, we could point out that (1) even poor, bullied, and ugly people generally prefer to be alive, and (2) late-term abortion is most certainly not rare. However, perhaps we would do best to answer as did a young parson, also traveling on the riverboat: “All things whatsoever ye would that men should do unto you, do ye even so unto them.”

Towards the end of the chapter, Stowe offers her own commentary on slavery: “The weak [are] broken and torn for the profit and convenience of the strong!” Tragically, even though slavery has been abolished in America, Stowe’s words are still quite true. Literally.