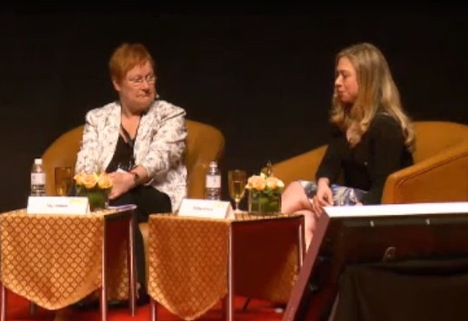 Chelsea Clinton, the outspoken daughter of Hillary and former president Bill Clinton, announced last week that 2014 will be the “Year of the Baby” for herself and her husband, Marc Mezvinsky. Since their wedding several years ago, Chelsea and her spouse have focused on personal pursuits that did not include having children.

In fact, one of those pursuits on Chelsea’s end has ironically been outspoken activism in favor of abortion rights. Just three months ago, at the “Women Deliver” conference in Kuala Lumpur on June 30, Clinton lamented that her maternal grandmother was the child of unwed teenage parents who “did not have access to services that are so crucial that Planned Parenthood helps provide” – namely, abortion. See video of her comments:

Had Chelsea’s great-grandparents had access to those “services,” her mother and former Secretary of State Hillary, and Chelsea herself, may not have ever existed. Clinton even states that her grandmother was one of the most profound influences in her life. Seemingly unaware of the problematic implications that can be gleaned from her abortion advocacy, Chelsea gushed to Glamour magazine about her dreams of a baby in the near future. CNN reports:

The fact that many wanted children result from unwanted pregnancies calls into question the very reason for organizations like Planned Parenthood and the United Nations Population Fund, whose mission statement seeks “to ensure that every pregnancy is wanted.”

Chelsea’s grandmother and Chelsea’s own child (when and if she conceives one) will both mark history as having been very wanted individuals. The problem is not with the existence of people like Chelsea Clinton’s grandmother, but with those who would criticize rather than reach out to parents in the same shoes as Chelsea’s great-grandparents.