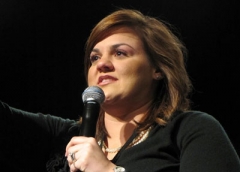 While working at Planned Parenthood, Abby lived in a double-world. When she became pregnant and carried her child to term, she knew that the child was a baby because that child was wanted. When a woman was pregnant with a child she didn’t want, the child was no longer a baby, but instead a blob of tissue.

Abby told the audience how the workers in the abortion clinic would gather the parts of the fetus after it was terminated. The pieces of the fetus were collected and called “products of conception.” The audience was taken aback when Abby exposed the way some workers would instead refer to the fetal material as “pieces of children.” The bags full of “pieces of children” would be put in a container they called “the nursery.”

One day, while Abby was at work, a visiting abortion doctor came in. He performed abortions through ultrasounds and asked Abby if she could hold the probe. Abby held the ultrasound probe as the doctor began the process of aborting a 13-week-old baby boy. Abby said that while working at Planned Parenthood, the question she heard thousands of times was “Will my baby feel pain?” Abby was coached by Planned Parenthood to tell the concerned women their child wouldn’t feel any pain until 28 weeks. Abby told the ladies this because she believed it herself.

As the abortion doctor moved his instruments towards the 13-week-old child, Abby saw the baby flinch. The child was flailing and trying to move away from the instrument, but he had nowhere to hide. This moment changed Abby’s life. Shortly after, she left the abortion industry and became a pro-life advocate. Since then, she has written a book called Unplanned and started a ministry called And Then There Were None. ATTWN helps women and men working in abortion clinics to leave the industry. So far, over 90 people have left the abortion industry because of this organization’s assistance.

As the banquet came to an end, Abby pulled out a letter she wanted to share. It was a letter she wrote to the 13-week-old baby boy she watched die. The letter was vulnerable and heartfelt. Abby apologized for watching the child die without doing anything to help. While she watched the abortion, she wanted to cry, “STOP.” Sadly, she was silent. In her letter Abby promised the unborn baby she would never be silent again.

The room was quiet as Abby read her letter. It was a touching moment for everyone present. After Abby’s visit, I heard from young adults who told me her story changed them. They took her story and shared it with their coworkers, friends, and even neighbors. Their enthusiasm to speak out against abortion is proof that Abby’s testimony is provoking a young generation.