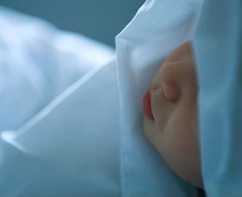 Meanwhile, many like him are tossed onto the garbage heap without a second thought.

Imagine having a laundry service that caters to a large health care facility. The usual delivery of dirty bed linens arrives and sits around for 48 hours. Finally, a tired worker drags the large duffel-type bag over to a workstation and starts to yank the contents of the bag out onto a table or the floor. All of a sudden, something unexpected tumbles out. It’s not hospital slipper socks, nor a damp towel. It’s not even a standard crumpled up pile of blue Chux. Wrapped in a sheet like a shroud is a fully formed stillborn baby.

That scenario is exactly what took place in St. Paul, Minnesota when workers from the Crothall Laundry were going about their day washing soiled sheets from Regions Hospital.

In response to the grisly discovery, the Minnesota hospital issued an apology, saying that the babe in the bedsheets was a 22-week-old fully-formed fetus who had died prior to birth. After delivery, the stillborn was taken to the morgue, where its small body was swaddled in a hospital sheet. Apparently, someone mistakenly tossed the tiny baby in with dirty linen, sending both the bedclothes and the stillborn to the laundry.

The hospital’s chief nursing officer, a contrite Chris Boese, said in a statement, “This was a terrible mistake, and we are deeply sorry. We have processes in place that should have prevented this but did not. We are working to identify the gap in our system, and to make sure this does not happen again.”

Staff at Regions Hospital claim they called to notify the family to express regret, and also extended support and counseling to the laundry service employees who got to see, up close and personal, what a 22-week-old fetus looks like. The interesting thing here is that, based on the need for psychological counseling, it’s clear that what the laundry workers saw didn’t resemble a blob of tissue – because if it did, counseling obviously would not have been necessary.

In hospitals that do perform abortions, it’s been alleged that leaving a baby to die in a laundry room is not unusual. Since having closed its Reproductive Health Clinic, Regions Hospital no longer performs elective abortions, so it’s unlikely that the child who ended up in the laundry was a result of a late-term abortion gone badly.

The “born alive” question arises because over the years, the definition of “pro-choice” has expanded to include the right to let a pesky infant who simply refuses to die live out its final minutes on a shelf in a soiled laundry room, cold and gasping for air.

And while to some that may seem shocking, Americans must agree that laundry room execution is acceptable, because in November a president was re-elected who believes that giving life-saving treatment to a wriggling little scrapper who defiantly resists going directly into the red biohazard bag “burdens the original decision of the woman and the physician to induce labor and perform an abortion.”

Clearly, it’s Barack Obama’s opinion that the sacred right to a hands-off form of infanticide trumps treating an unwanted baby with the dignity and respect every human being rightly deserves.

The Kermit Gosnell murder trial is currently rousing America from its “abortion is a benign procedure” stupor, is proving that babies do occasionally emerge from the womb alive as a result of a botched abortion. In Italy, one defiant warrior aborted at 22 weeks for the sin of being “disabled” struggled to survive under a sheet with his umbilical cord still attached. It was under that sheet that a priest who had come to the laundry room to pray found him. The baby boy was transported to neo-natal care, where he later cooperated with the “original decision of the woman and the physician to induce labor and perform an abortion” and died.

Americans are coming to find out that infanticide isn’t a radical viewpoint in pro-choice circles. Recently, pro-choice community pillar Florida Alliance of Planned Parenthood Affiliates sent a lobbyist named Alisa LaPolt Snow, complete with pearls and a conservative business suit, to speak to the Florida legislature in defense of the practice of allowing babies who survive an abortion to die without medical intervention.

Ms. LaPolt Snow also believes that the “right to privacy” decision as to whether post-abortion children shivering and struggling to live be given medical care is a matter solely for the mother, her family, and the abortionist. Snow’s opinion, albeit articulated in a different way from the president’s, is indistinguishable from Barack Obama’s, and from his deep concern over the issue of human rights burdening the original decision to dispose of a baby.

And so, Regions Hospital extended apologies to the parents of the 22-week-old stillborn infant, who was transported from the Crothall Laundry back to the hospital morgue to be inspected by the medical examiner. In the meantime, traumatized laundry workers may seek counseling after finding the remains of a baby about the same gestational age as thousands who are terminated every year in this country. The difference is that the latter group is deprived of dignity and consists of nameless infants who are tossed onto the right-to-choose garbage heap without even a second thought.