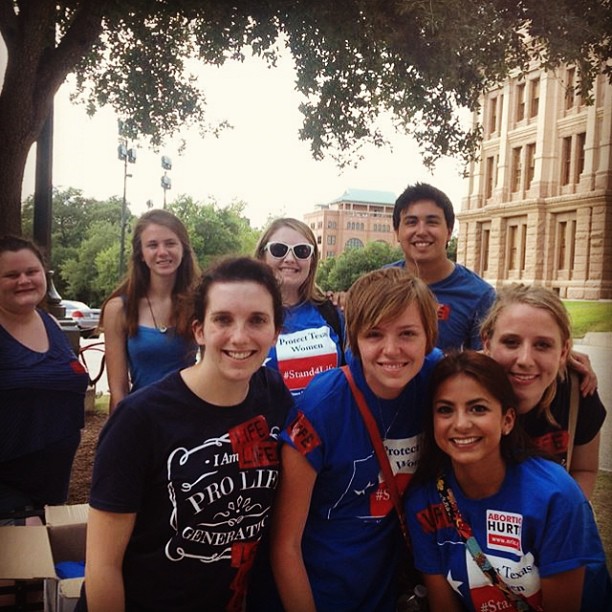 It was like nothing I’ve ever seen. People were chanting and roaring at each other, ready to attack at any moment, like lions eagerly awaiting just the right time to pounce on their prey. I felt like one of them might even try to eat me for lunch – I mean, after all, it was almost lunchtime.

But nevertheless, I fearlessly held up my little video camera in the middle of the orange sea of protesters, ready to catch whatever nonsense may occur inside the Texas state capitol’s rotunda (dirty tampons being tossed at blue shirts, fights, etc.). I stood my ground for what seemed like hours when someone tapped me on the shoulder.

“Can I interview you, Miss?” It was a man in a suit holding a microphone and another one with a large video camera with a sticker on the side that read “ABC News, Channel 12.” It was the one day I had decided not to wear any makeup, my hair wasn’t washed, and both of the sleeves of my oversized baby-blue shirt were cleverly hemmed up with fire engine-red duct tape which bore the word “LIFE” in black sharpie. The bright light attached to the camera was blinding, and I could feel my knees beginning to shake, but my adrenaline rush from the excitement and loudness of the crowd overcame my nerves. Without any hesitation I yelled, “Yes!,” and the anchor pointed his microphone at me. 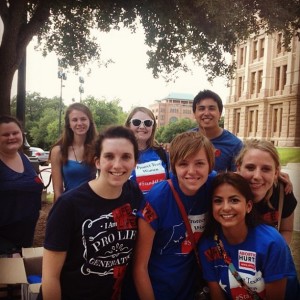 A few of us posing for a picture after handing out water and shirts in front of the capitol.

“Sources are saying that the bill will be passed by the Senate in a few hours.” He paused. “So why are you still here?”

I tried desperately to drown out the noise in the background. What did he just say? I thought.

“Pardon?” I yelled back at the anchor. He repeated the question, and this time I knew what my answer would be.

The orange shirts (pro-abortionists) carried signs which read things like, “pro-choice = pro-life,” “Keep your rosaries off my ovaries,” “My body, my choice,” and “Wendy Davis is my hero.” One girl with our group had the back of her shirt ripped by an angry protester, and another lady I interviewed had her things stolen by a mob of people in the overflow chamber. There were threats from the pro-abortionists that human feces and urine would be thrown at people in blue (more than 20 jars were found filled with waste at security), and one even reported a pro-abortionist carrying a semi-automatic rifle. Some orange were smoking, some were spitting, and some were cursing at those dressed in blue silently praying and singing hymns. Inside the Senate gallery, women chained themselves to posts and sat down in front of the entrance to block the DPS as well as those inside the Senate chambers – up to thirty were arrested and literally carried off the premises kicking and screaming, “Shame on you, shame on you!”

There were more than a few times I almost lost my cool while standing in the middle of the orange sea, and the pro-aborts weren’t the only ones I had resentment towards. One woman carried a large cross with a sculpture of the body of Jesus on the front, and she was chanting, “Don’t mess with Mother Mary; she will kick your a**.” The day before, some blue shirts held large, graphic signs of aborted babies, screaming, “Murderers go to Hell.”

Why was I still here? Good question. We were 90% sure the bill was going to pass. So why was I still fighting for it? The answer was simple. I wasn’t fighting for the life of the bill anymore. I had bigger reasons for being in the middle of the life-threatening mob in the Texas capitol.

It was war – one side against the other, fighting over life and death. Good versus evil. But I didn’t want to fight anymore – I didn’t want to argue or scientifically prove that an unborn baby is a human being. No, these people were far from hearing the truth, and in fact, their goal was to destroy it. These people didn’t need my bitterness – they needed love. The media didn’t need to catch furious blue shirts yelling at orange ones, calling them murderers – but instead, it needed to capture the love and serenity we offered. And that’s exactly why we were still there: to prove that every life is valuable – in the womb or out of it.

If I could demonstrate the same compassion and love I have for unborn babies on the out-of-control pro-abortionists unmistakably dressed in every shade of orange, then maybe one of them would conceive the truth of the pro-life message: that every life has value.

The great Dr. Seuss once said, “A person’s a person, no matter how small.” But what if we changed that quote to say, “A person’s a person, no matter how rude, how annoying, how out-of-control”? You fill in an adjective. What if we treated every person as if he or she has worth, as if the value of life is immeasurable? Wouldn’t the world be a different place?

Mother Teresa said, “If we believe, we will love, and if we love, we will serve.”

I stood in that terrifying rotunda because I believe that every human being deserves a chance at life. And I went to Texas because I wanted a chance to put my beliefs into action.