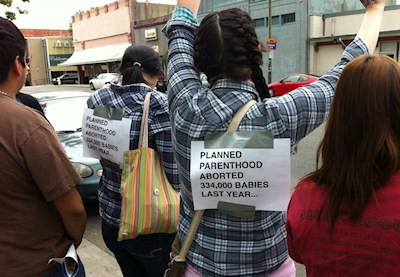 Just today, the state was issued an injunction  and ordered by Judge J. Thomas Marten to continue funding to Planned Parenthood until the lawsuit takes it course.  Kansas, despite the legal setbacks the state is suffering,  is resolutely standing up for both state sovereignty and the sanctity of life and the attorneys for the state think they have a case, and hearing both the state’s and Planned Parenthood’s arguments, the state attorneys are not being overly confident.

The grounds for this lawsuit being brought forth to court are displayed in Planned Parenthood’s attorney’s arguments for the nullification of the new Kansas law. They argue that this law violates the Constitution, specifically the Supremacy Clause. Their argument is that a state stipulating further requirements in a federal program than the federal government has stipulated goes against the supreme and overruling power of the federal government, as laid out in the Supremacy Clause of the Constitution. When the Supremacy Clause is applied to the new Kansas law, however, not much seems to be in conflict. The Supremacy Clause states that, “This Constitution, and the Laws of the United States which shall be made in pursuance thereof; and all treaties made, or which shall be made, under the authority of the United States, shall be the supreme law of the land; and the judges in every state shall be bound thereby, anything in the constitution or laws of any state to the contrary notwithstanding.” The argument of Planned Parenthood is that since federal law already establishes the conditions for the money that is distributed to Planned Parenthood then the state cannot interfere with this overriding law. This argument, though it sounds nice, is shaky when stacked up against the federal law in question and the manner in which the Kansas law addressed it.

The federal law which enables Planned Parenthood to receive government funding is commonly referred to as Title X Family Planning Program, or just Title X. This law was designed to provide funding to organizations with the intent that the money be spent to help patients in the area of family planning. It never expressly mentions Planned Parenthood, but rather enables the federal government, through direct funding and grants to the states, to fund organizations of this nature. What Kansas has done with their new law is merely re-appropriate where that grant money given to them under Title X goes. The law merely leaves Planned Parenthood out of the picture. The state is still appropriating its grant money to organizations that are acceptable under Title X’s requirements, and specifically Kansas will be providing the money to public health departments and hospitals. In short, Title X, in its entirety, is still being respected and adhered to by Kansas; they are merely just changing the manner in which they carry out the provisions.

The lawsuit being raised against Kansas by Planned Parenthood is, overall, not grounded and politically biased, but sadly this can be effective as it was with Judge Marten. Their main argument of the Supremacy Clause does not apply because, simply, no federal law is being hindered or disregarded; it is just taking a new, but acceptable, shape. This is merely a case of Planned Parenthood feeling entitled to our taxpayer money on a silver platter. Just because we are taking it away does not mean we are breaking the law. We can only hope that the Kansas attorneys can open the judge’s eyes to this truth.