Signs of hope abound in the ongoing fight to preserve the sanctity of life in America – and one of the best signs in recent weeks has been the removal of … some signs.

In Montgomery County, Maryland, Alliance Defending Freedom staff and allied attorneys have been fighting a law that required pro-life “limited-service pregnancy centers” to post signs essentially advising women against using their services. The signs were required to say that a) the centers don’t have a medical professional on staff, and b) the county health department advises any potential clients to speak with a licensed medical professional.

Interestingly, the county deliberately crafted the law so that it doesn’t apply to pro-abortion centers, such as Planned Parenthood, even if counseling at those centers is offered by non-medical persons.

In March, a federal court issued a ruling striking down the Montgomery County law, and on June 18, the county paid $375,000 in attorneys’ fees, costs, and nominal damages. The court’s ruling cited “the lack of any evidence that the practices of [the pregnancy care centers] are causing pregnant women to be misinformed [or] negatively affecting their health.” 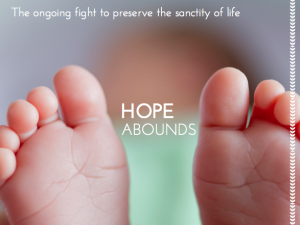 This week, a federal district court issued a similar ruling against an Austin, Texas ordinance requiring pregnancy care centers in that city to post messages encouraging women to go elsewhere. Under the law (and threats of severe fines), centers had to display multiple signs at their main entrance where women would see them before any staff had a chance to talk with them.

The signs warned women to consider whether the center “provides medical services,” has a fulltime “licensed health care provider,” or even a state license. The court found the city’s law was too vague to use against a center offering free information and help to women.

Both of these rulings set important precedents for other, similar ADF lawsuits pending inBaltimore and New York City, and possibly for a different law against pregnancy centers in San Francisco.

“Courts around the country have been striking these types of laws down, and these decisions join the growing list,” says ADF Senior Legal Counsel Matt Bowman. “Pro-life pregnancy centers, which offer real help and real hope to women, shouldn’t be punished by political allies of the abortion industry.

No government, in a quest to achieve a political goal, should ever resort to coercing or shutting down someone else’s protected speech in violation of the First Amendment. We hope these settlements will cause other governments to reconsider any efforts to enforce similar laws.”

These important victories underscore the crucial difference God is enabling ADF staff and allied attorneys – through your prayers and support – to make in the great struggle to preserve the lives of unborn children. They also expose the real agenda of pro-abortion groups determined to manipulate the law – not out of any real concern for women’s health, but out of a preoccupation with their own profits that overrides even the most basic respect for human life. These groups may talk of “a woman’s choice” – but they are in fact working to eliminate that choice and drive women to abortion.

Please join me in praying for our attorneys, as they work diligently to preserve life and protect women – and pray, too, for a renewed commitment in the hearts of all Americans to the sanctity of human life.

Editor’s Note: This article was first printed on June 27, 2014, on Alliance Defending Freedom’s blog, and is reprinted with permission.